C5 and C6 sugars can also be produced from lignocellulosic crops or wastes and residues via various pretreatments.

From the sugar platform to biofuels and biochemicals

A detailed review of the technologies used to convert sugar is provided in the report From the Sugar Platform to biofuels and biochemicals (April 2015), produced by E4Tech, RE-CORD and WUR for the European Commission Directorate-General Energy (ENER/C2/423 - 2012/SI2.673791).

Sugar beet is a demanding crop in terms of soil conditions, fertilizer and irrigation. In Europe 188.4 million tons of sugar beet were produced in 2012 (FAO, 2014) and it was ranked # 11 in agricultural commodity production. In Europe, sugar beet is used to produce fuel ethanol, but is subject to the proposed 7% ceiling on biofuel production from food crops (see proposed changes to the Renewable Energy Directive and Fuel Quality Directive).

© Copyright British Sugar
Britian's first bioethanol plant at Wissington sugar factory. The bioethanol refinery uses local sugar beet to make 75 million litres of bioethanol a year – equivalent to about 2% of the petrol used by all cars in the UK. The green fuel delivers 71% savings in CO2 emissions when compared to petrol.
View at larger size >> 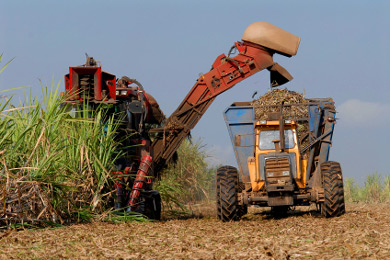 Although sugar cane is a 'first generation' feedstock, it is generally considered to be relatively sustainable as it offers a high energy balance and high GHG reduction. It has not been shown to have significant impact on food supply or prices in Brazil, where there are 9 million vehicles that use ethanol or ethanol blends from sugar cane. Sugar cane is also being developed as a potential energy crop (i.e. using crushed bagasse as a feedstock) in Europe and Brazil.

In January 2015, Alkol Biotech announced the first shipments of its EUnergyCane sugarcane hybrid grown near Motril in southern Spain. The energycane (energy cane) is being supplied to a 2G ethanol producer in Denmark. In April 2014, Alkol Bioenergy and the Universidad Politécnica de Madrid signed an agreement to develop a hybrid of Brazilian sugarcane varieties for Spain, where the plant has been cultivated for over two centuries, but where farmers currently use older varieties with lower yields and lower resistance to disease. The aim is to use the bagasse from the new sugar cane hybrid for cellulosic ethanol production. The project is being developed by the UPM School of Forestry, ETSI.

An energycane variety "Cana Vertix" is also being developed by Granbio for use in cellulosic ethanol production. It is 3 times more productive than conventional sugar cane and can be planted on degraded land. Energy cane varieties have also been trialled in North America with positive results (for example, by Louisiana State University AgCenter). 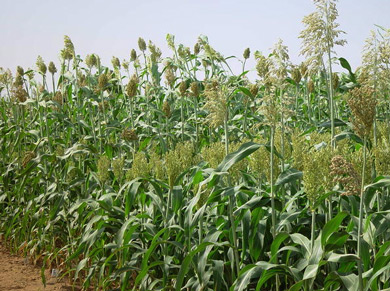 Sweet sorghum, as a source of either fermentable free sugars or lignocellulosics, has many potential advantages, including: high water, nitrogen and radiation use efficiency; broad agro-ecological adaptation; rich genetic diversity for useful traits; and the potential to produce fuel feedstock, food and feed in various combinations. Further research on Sweet Sorghum has been carried out by SWEETFUEL - Sweet sorghum: an alternative energy crop (FP7 - 227422)

Sweet Sorghum is also being developed as a biofuel feedstock in the US (e.g. Regional Strategy for Biobased Products in the Mississippi Delta). In April 2013, construction started on a 20 MMgy sweet sorghum-to-ethanol plant in Florida [Ref: Southeast Renewable Fuels LLC ]. Also in the US, NexSteppe has developed low-input, high-yield Sweet Sorghum and 'High Biomass Sorghum' strains for use as bioenergy feedstocks.

Ceres has also developed varieties of Sweet Sorghum that are being commercially planted in Brazil [Biomass Magazin 2015]. In March 2013, Chromatin signed an agreement to supply POET with Sorghum for its bioethanol plant in South Dakota. In November 2013, Arcadia Biosciences and DuPont Pioneer are collaborating on a project to use biotech and breeding techniques to improve the productivity of Sorghum.