Oil crops are the base for biodiesel production. In Europe, rapeseed is the most common feedstock for biodiesel production. In the US, Argentina and Brazil, soybean oil is the most dominant biodiesel fuel feedstock. In Indonesia and Malaysia, palm oil is the main feedstock cultivated. In 2008, 66 % of biodiesel in Europe came from rapeseed, 13 % from soybean and 12 % from palm oil (Junginger et al., 2014). Besides the most prominent oil crops (palm, soybean, rapeseed and sunflower), many other crops such as, canola, mustard, flax, jatropha, coconut, hemp, and pennycress are good resources of oil.

The use of corn oil is also gaining momentum in the United States, where large volumes of maize are used in ethanol production. Companies such as Corn Oil One are developing improvements to crude corn oil to facilitate conversion into biodiesel. Innovative technologies for separation of corn oil are included on the process innovation page.

In the EU, concerns over iLUC and the Food vs. Fuel debate have led to proposals to limit biofuel production from food crops to 7 % (see proposed changes to the Renewable Energy Directive and Fuel Quality Directive). This has accelerated interest in drought-resistant oil crops that can be cultivated on marginal lands and don't compete with food crops.

However, there are doubts cast on the validity of the assumptions made and models used to underpin the iLUC debate. For example, in Germany in early 2015, UFOP published a brochure Opportunity or risk for the future!? presenting a more positive outlook on the benefits offered by Rapeseed and other oil crops.

Improving sustainability of existing oil crops has been a key focus of producers in the last decade. For example, the RSPO Roundtable on Sustainable Palm Oil was inaugurated in August 2003. Sustainable winter oilseed rape - a 24 page brochure was jointly published in 2007 by Unilever N.V., and UFOP (UNION ZUR FÖRDERUNG VON OEL- UND PROTEINPFLANZEN E. V.). 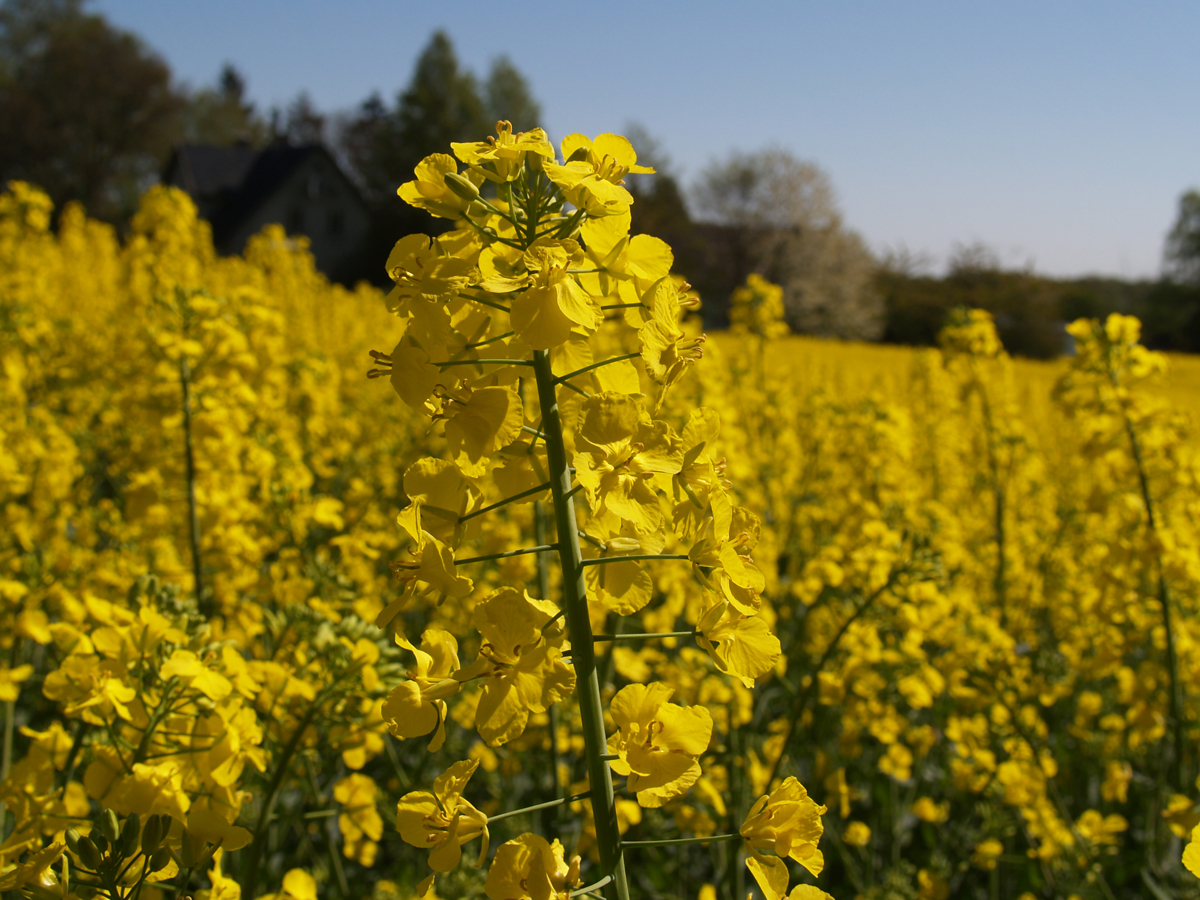 Globally, commercial supply is dominated by two species, Brassica napus L. and B. rapa L. Both species contain spring and winter forms that are distinguished by vernalization requirement. Seeds of these species contain 40 % or more oil and produce meals with 35 to 40 % protein. Compared to soybeans, rapeseed can have more than twice the oil content but a lower protein level. World rapeseed production in 2015/16 is pegged at 68 million tonnes, a 4–5 percent drop relative to the preceding two years’ bumper harvests and is still ranked right after soybeans concerning the production of major oil crops (FAO, 2016). 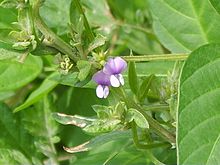 Soy is a bushy, leguminous plant, native of South-East Asia that is grown for the beans, which are used in the food industry, for protein in cattle feed and for oil production. The beans typically contain about 18 - 20% oil, 40% protein, 17% cellulose, minor contents are sugar, ash, fibre and other components. Soybeans are the world’s largest oilseed crop, with a production of about 56 % of the world’s total oilseeds. The United States is the largest single producer of soybeans (FAO, 2016).

Sunflower grows in a variety of soil conditions but performs best in well-drained soils with high water-holding capacity. In drier regions it often needs at least supplemental irrigation for best yields. However, sunflower is considered a drought tolerant crop and has a deeper root system than most crops. Sunflower seeds contain 45 – 55 % oil that is used for food, cosmetics or biofuel production. About 8 % of the world oil crop production were sunflower seeds according to the FAO (2014). 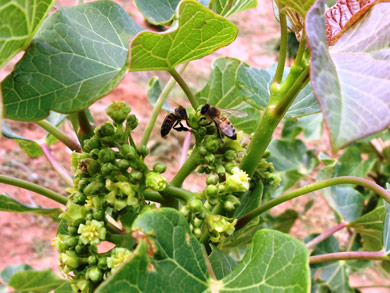 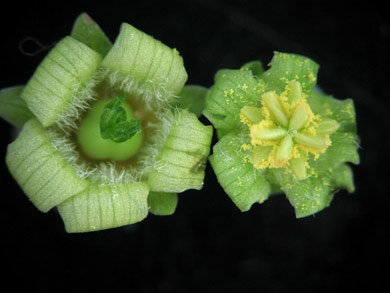 Jatropha curcas is a tropical plant that grows well on marginal land, is drought tolerant and has seeds with high oil content (~40%). In Singapore, Temasek Life Sciences Laboratory and JOil Pte Ltd. have developed Jatropha strains with 75% oleic acid content, compared to the typical 45% percent (May 2012).

In common with other members of the family Euphorbiaceae, Jatropha contains toxic substances and therefore is unsuitable as a food/feed crop. Jatropha seemed a very promising candidate as a biofuel feedstock and an investment boom followed in the mid-2000s. However, initial claims of high yields could not be verified on marginal lands; the early cultivars tested required lots of water, good soils and high fertiliser inputs to achieve high yields.

However research and investment in Jatropha continues. In 2014, Lufthansa signed a Memorandum of Understanding with JatroSolutions GmbH (a subsidiary of EnBW, the third-largest German energy company) to make jatropha production commercially viable. In future, Lufthansa will help the start-up company to set up a raw materials supply chain to ensure the provision of biosynthetic fuel derived from the jatropha plant. [Source:greenaironline , September 2014].

In 2014, Jatropower AG, Switzerland, acquired the assets of Qunivita BV. Jatropower offers a wide range of hybrid seeds and Jatropha cultivars. Jatropower has a focus on high-yielding, non-toxic edible jatropha, which enables safer handling of the plant and allows for the use of the kernel meal (after oil extraction) as animal feed. Its main research farms are situated in India, and it operates variety testing sites in Paraguay and Kenya. [Source: Jatropower].

Live-fence hedges of Jatropha with a double benefit may be a profitable option for small scale farmers in Africa. This was investigated in a project 2010 - 2011 (see Bioenergy In Africa). 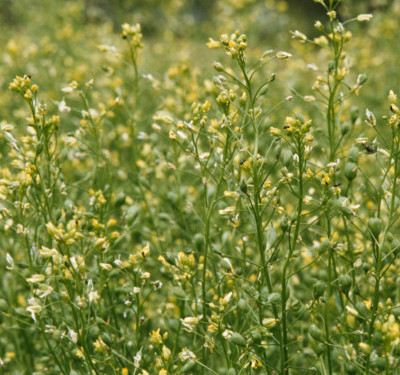 Camelina sativa is an oil plant that grows well on marginal land, is cold-tolerant and has an oil-yield of 35-38%. Sustainable Oils (a partnership between Targeted Growth, Inc. and Green Earth Fuels, LLC) currently has 30 Camelina breeding trials in the US and Canada. The company first provided Camelina-based biodiesel for a Japan Airlines test flight in January 2009. Biojet fuel derived from Camelina has been successfully used on many demonstration flights in the last five years. The Eureka BIOFUEL-CAMELINA Project, coordinated by ISCO, Poland, studied the cultivation of Camelina sativa and cameline oil production, biofuel production and evaluation. The Camelina Association of Ukraine was established in 2014 for cultivation and commercial exploitation of Camelina sativa products in Ukraine. 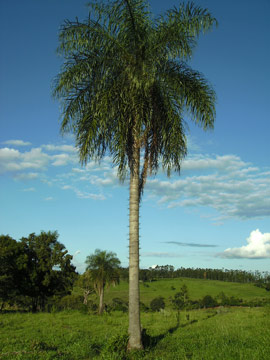 The above images (and that of fruits, below) are © Copyright Oberländer and kindly provided by University of Hohenheim, Germany

The neo-tropical palm species Acrocomia aculeata naturally occurs in a wide range of tropical and subtropical environments. In contrast to the African oil palm, it tolerates low temperatures (> -5°C) without negative impacts on yields. It grows between 30° north and south of the equator and is even found in areas with longer dry seasons up to six months such as the Chaco region of Paraguay and cerrado region of Brazil. After five to six years it yields a harvest of 20 t/ha/a. Since this fruit is nontoxic, all parts of it can be used. All have their own market; however its potential in terms of food, feed and fuel is still underexploited. Considering the yield of perennial plants, the Acrocomia palm (2 t/ha/a of Pulp oil and 1 t/ha/a of Kernel oil) can ranked in-between the African oil palm (Elaeis guineensis, 3 – 6 t/ha/a of Pulp oil and 1 t/ha/a of Kernel oil) and Jatropha (Jatropha curcas, 1 t/ha/a).

For the past decade, the University of Hohenheim in Germany and the Catholic University of Paraguay have worked together on the domestication of Acrocomia aculeata, which is endemic to the Americas. There is substantial knowledge available on growth and yield performance to establish sustainable and rentable plantations. This palm is ideal for 'peasant farmer' cultivation, but is also well suied to sole cropping and agroforestry systems including silvo-pastoral systems. Due to its perennial growth pattern and long-term ability to provide economic yields it offers a huge potential for carbon sequestration as well. 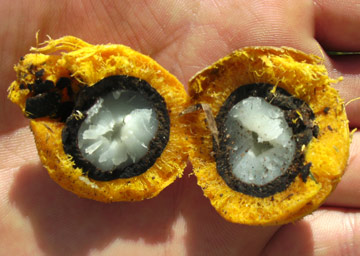 The fruits of Macaw palm, can be used to produce food, feed, energy/fuel and raw materials for the cosmetic and chemical industry. In Paraguay, currently ten oil mills are in operation using Acrocomia fruits for oil extraction, although almost all fruits are collected from wild growing palms with minor control of quality aspects.

A salt mash halophyte that is found on both the east and west coast of the US and Mexico. The plant is of interest as a biofuel feedstock as it grows in desert environments, can be irrigated with seawater, and the seed contains around 30% oil content. It is being grown extensivley across the globe, for example in India. In The United Arab Emirates, the Sustainable Bioenergy Research Consortium is developing an Integrated Seawater Energy and Agriculture System (ISEAS) to cultivate the halophyte Salicornia as a sustainable feedstock for biofuel production. 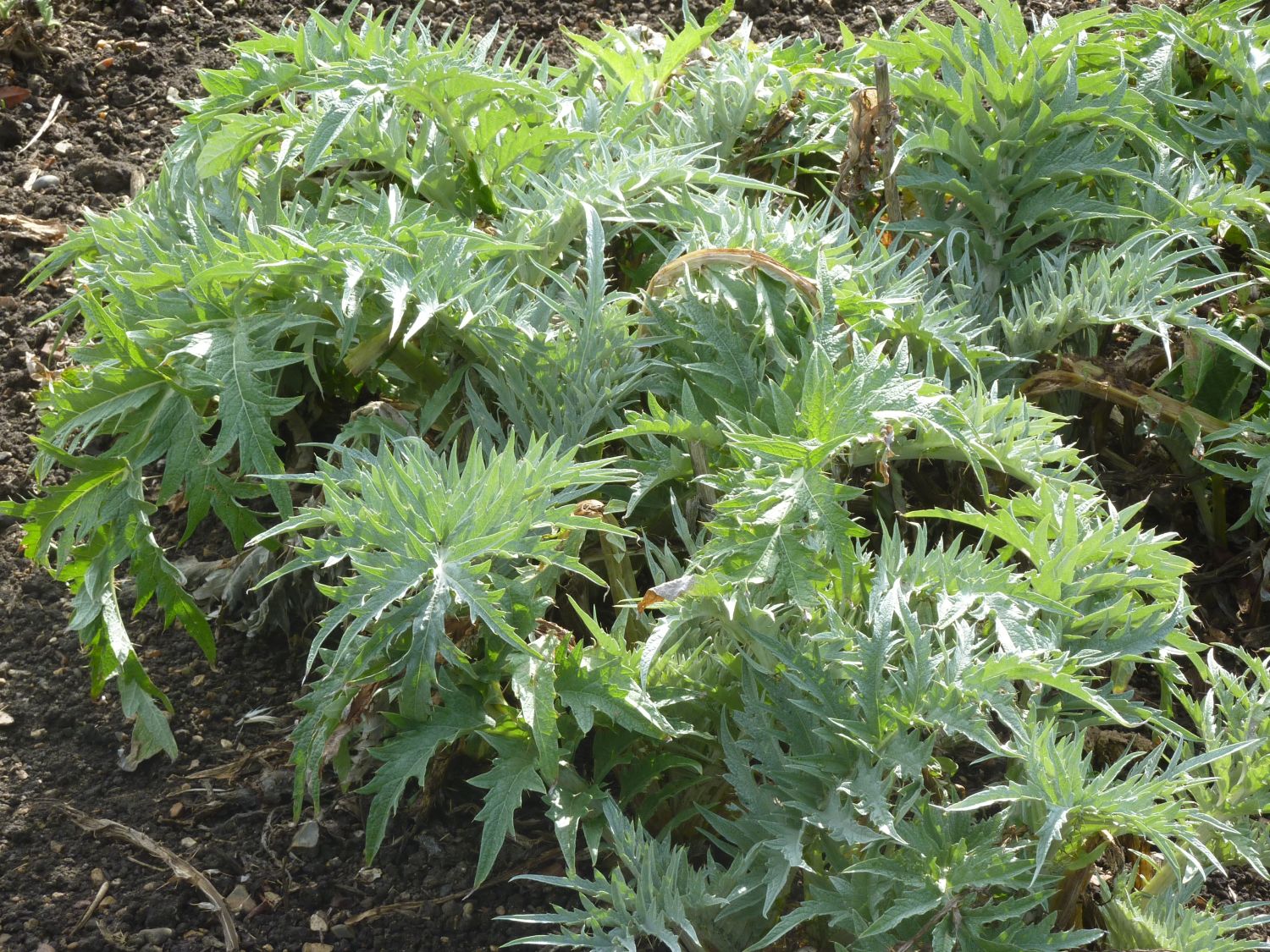 The oil content of cardoon seeds (artichoke oil) is between 20–32 % (Pasqualino, 2006). The suitability as a feedstock for biodiesel production has been investigated in several studies (e.g. Pasqualino 2006, Torres et al. 2013).

Cynara cardunculus (Cardoon) has also been investigated as an energy crop for co-firing with lignite at the PPC Kardia Power Plant, Greece, as part of the FP6 DEBCO project.

Has been investigated in the U.S. by USDA-ARS as a potential feedstock for biodiesel. Pennycress can be grown as a winter ground cover crop and harvested in the spring, providing soy farmers with additional income. Thlaspi arvense varieties are being commercially developed by companies such as Arvegenix.

Brassica carinata oilseed has been developed as a biofuel feedstock (Resonance™) by Agrisoma Biosciences (Canada). It is suited to semi-arid areas and produces seed with 44% oil content. In April 2012, Agrisoma announced that Resonance™ will be evaluated as a feedstock for Honeywell Green Jet Fuel™, and reported that the world's first civilian flight powered solely by biofuel was flown from Ottawa, Canada. 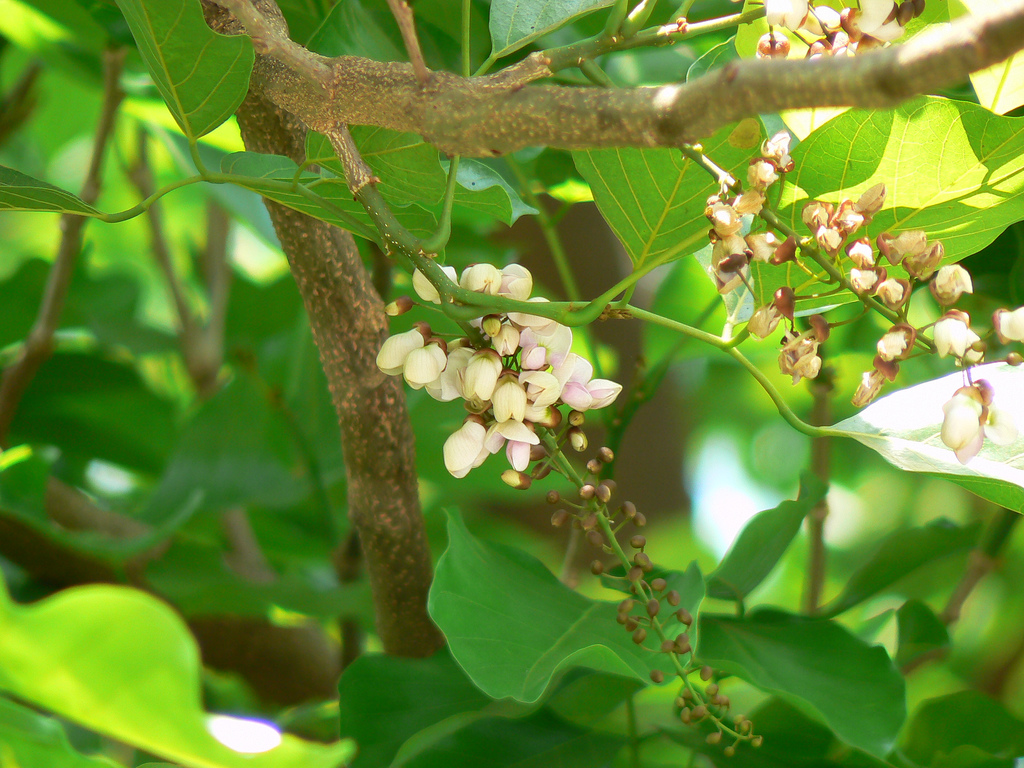 Millettia pinnata (Pongamia pinnata) is a leguminous tree species (15-25m) that grows widely Asia, including arid regions. It is pest resistant and produces seeds with 25–40% lipid content (nearly half oleic acid). It also produces extensive root networks and can be used to prevent soil erosion (but also may cause problems as an invasive weed, if not properly managed). It has been widely investigated in India as a biodiesel feedstock - see Pongamia as a source of biodiesel in India (Dwivedi et al, 2011). The University of Queensland is also carrying out R&D on Pongamia pinnata as a biofuel feedstock. 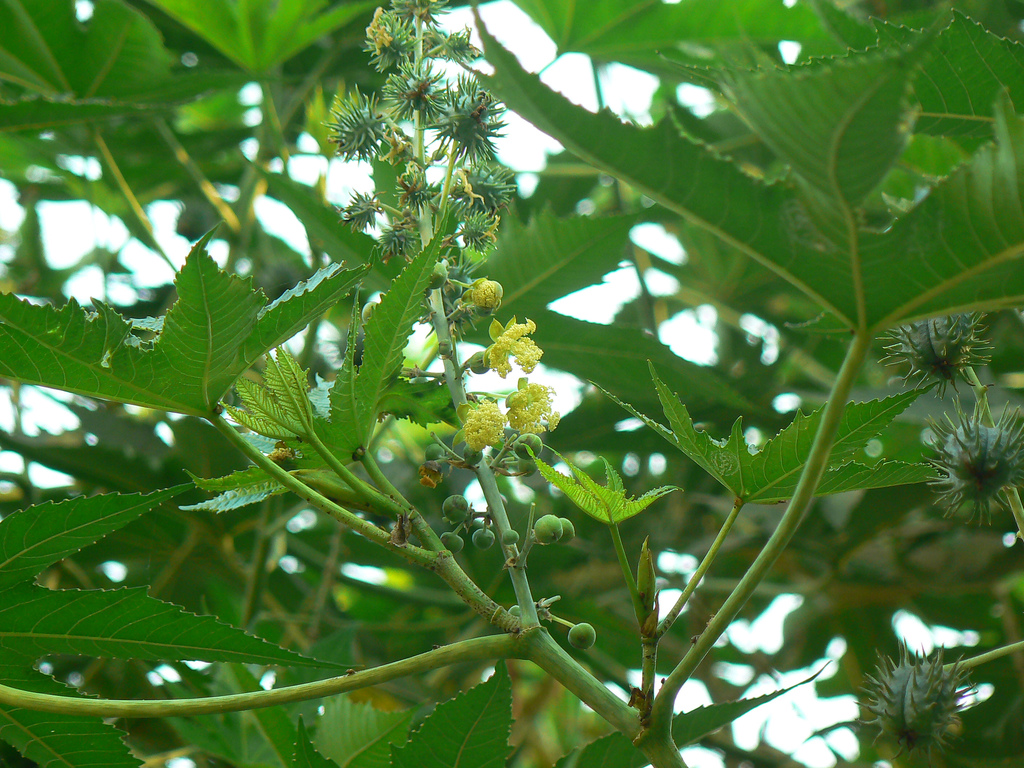 Castor oil is also being developed as a potential industrial-scale biofuel feedstock. "Castor bean is a non-edible, high oil-yielding crop (40%-50% seed oil content) with high tolerance for growth under harsh environmental conditions, such as low rainfall and heat" [Source: Evogene].

Pongamia as a source of Biodiesel in India
Dwiwedi et al. (2011)