Biomass is the oldest source of fuel energy. However, using biomass for the production of transport fuels is a relatively new application with a significant increase during the last 10 to 15 years. Biofuels can substitute fossil derived transport fuels, with the advantage of providing carbon from a renewable source.

In broad terms, the various types of biomass feedstocks potentially available for bioenergy production can be categorized as follows :

On the basis of the feedstock used in production, biofuels and intermediate bioenergy carriers may be referred to as:

Advanced (second-generation and third-generation) biofuels - as defined by the European Commission - are produced from feedstock that "do not compete directly with food and feed crops, such as wastes and agricultural residues (i.e. wheat straw, municipal waste), non-food crops (i.e. miscanthus and short rotation coppice) and algae.” At the moment only about 2 % of biofuel production are covered by advanced biofuels [Bacovsky et al. 2012].

Following global concerns about the impacts of using food crops for production of bioenergy, the EC has introduced measures to encourage a more diverse range of feedstocks to be used in future. Measures include restricting state aid for conventional biofuels, a proposed cap of 7 % (of transport energy use) on biofuels from "food crops", and double counting of biofuels produced from certain wastes and residues. Hence, the future expansion of biofuels (for road freight, air transport, shipping, and other uses) will require the commercial deployment of innovative conversion technologies that may be more complex and costly than conventional production methods.

This page contains general information and links on a range of sustainable feedstocks that could be used for producing advanced biofuels and intermediate bioenergy carriers. These include :

The term advanced biofuels typically refers to biofuels produced from lignocellulosic (LC) biomass (i.e. any non-food 'woody' parts of plants that humans cannot digest). This covers a range of plant molecules/biomass containing cellulose and hemicelluose with varying amounts of lignin, chain length, and degrees of polymerization. Some cellulosic materials are relatively easy to breakdown into substrates that can be used to create fuel molecules. For example, citrus peel may be converted to plant sugars. For more complex cellulosic materials containing greater amounts of lignin (e.g. hardwood) the production route to liquid biofuels requires pretreatment and may be more challenging and costly.

In Europe, proposals have been introduced to limit the amount of bioenergy feedstock that can be grown on land suitable for food-crop production. Hence future expansion of bioenergy production is dependent on cultivation of energy crops on marginal land, and mobilisation of waste streams (for example, from agriculture, forestry, bioindustry and domestic refuse collection). The actual amount of sustainable feedstock available depends on various factors:

Such issues have been the subject of a range of projects and studies on biomass availability in Europe.

Deliverable D8.2 "Vision for 1 billion dry tonnes lignocellulosic biomass as a contribution to biobased economy by 2030 in Europe" from the S2Biom project states that "Recent  studies  and work  in  S2Biom  provide  robust  scientific  evidence  that  at  least  1 billion tonnes of lignocellulosic biomass will  exist in Europe on an annual basis across the  various  supply  sectors  (agriculture,  forestry,  biowastes and  dedicated  perennial crops).The recently published  studies  of  biomass  assessments for 2020-2030  identify  four primary sources that could provide additional biomass and support growth of bio-based industries,  namely: agricultural  residues, forest  biomass, wastes and non-food  crops.The  recent  S2Biom estimates for  the  2030  base  potential  (which  includes  the sustainability  criteria  as  stated  within  the  Renewable  Energy  Directive I) amount to 1,093 million tonnes of dry lignocellulosic biomass per year"(2016). 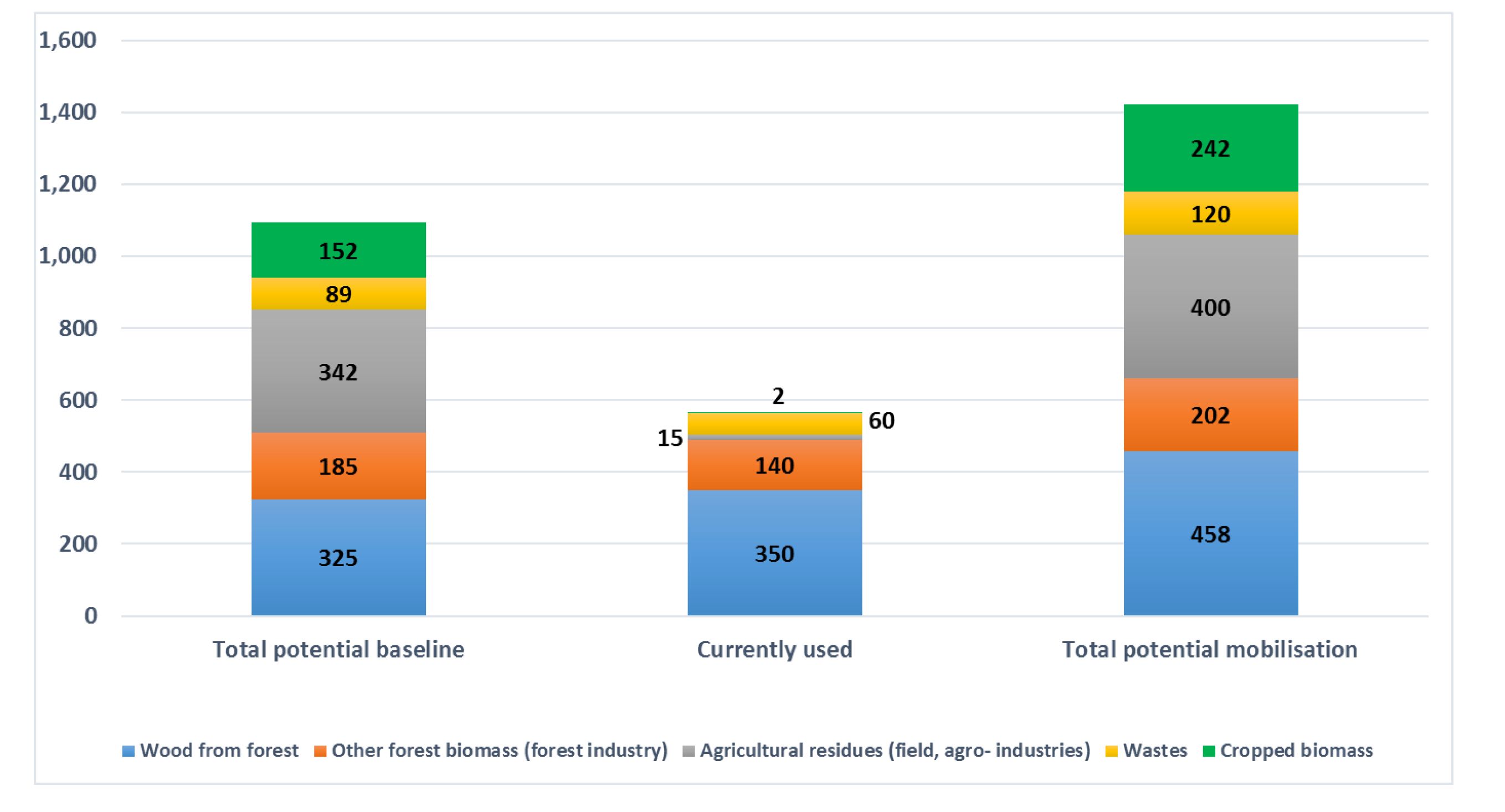 Elbersen et al. (2012) estimate that there are approximately 5.5 million hectares of agricultural land on which bioenergy cropping takes place. This amounts to 3.2 % of the total cropping area (and around 1 % of the utilised agricultural area) in the EU-27. Practically all of this land is used for biofuel cropping, mostly oil crops (82 % of the land used for biomass production), which are processed into biodiesel. The rest is used for the production of ethanol crops (11 %), biogas (7 %), and perennials which go mostly into electricity and heat generation (1 %).

There are plenty of studies on biomass potentials. In the IEA Bioenergy ExCo Report of 2009 an enormous variation in the results of worldwide biomass potential assessment according to different studies is stated. In the same report a technical biomass potential of 1500 EJ/year is mentioned; speaking about a sustainable biomass potential the authors claim 200 – 500 EJ/year by 2050. In the so called “sustainability scenario” of Elbersen et al. (2012) the potential for 2030 is 353 Mtoe compared to the current 314 Mtoe, with the overall waste potential declining. Only a rise for agricultural residues and for secondary and tertiary forestry residues (e.g. saw dust, black liquor) is to be expected. On the other hand the authors of "Waste – Europe’s untapped resource" state that if all waste and residues were converted only to biofuels in the EU, 16% of road transport fuel could be provided in 2030 (technical potential of sustainably available feedstock from waste).

Other recent assessments of biomass potential include Global Bioenergy Supply and Demand Projections: A working paper for REMap 2030 published by IRENA in September, 2014.

An EEA report published in 2013 EU bioenergy potential from a resource efficiency perspective provides an overview on the use of biomass feedstocks in Europe, and discusses some of the issues surrounding expansion of energy crop production.

Globally, projects - such as the Landscape Biomass Project Iowa State University - look at how to balance needs for food, feed, fuel and energy, by integrating advanced biofuels technologies and novel energy crops.

The links at the end of this page provide more detailed information on the various types of sustainable feedstocks for production of advanced biofuels.

The amount of biomass required to replace a significant proportion of the fossil fuel used in transport runs into millions of tonnes. Hence, a crucial question is that of biomass yield. Higher yields obviously enable a similar amount of biofuel to be replaced using less land. However, land use efficiency may also be improved by selecting an overall production chain that can use a high yielding biomass crop.

Competition for biomass is a key issue in the debate on bioenergy. Biomass is used as food, materials (e.g. bioplastics, wood, textiles etc.) and for energetic use – all these applications require (biomass) resources. Factors influencing competition are raw material prices, prices of end products, policy, availability of land for feedstock or technological constraints. This brings along the following challenges for bioenergy deployment:

An accurate planning, coordination, implementation and control of biomass disposability is essential for successful bioenergy production. The overall economic, environmental and energy cost of collection, handling, processing and transport needs to be assessed. Other factors include :

A Life Cycle Analysis for any proposed use of biomass needs to be applied taking into account the total cost and energy balance from the source of the feedstock to its end use.

The Sustainability section of this website discusses land availability, food vs fuel, iLUC and related topics in more detail.

Fuel quality directive and renewable energy directive (P8_TA-PROV(2015)0100 Fuel quality directive and renewable energy directive II; European Parliament legislative resolution of 28 April 2015 on the Council position at first reading with a view  to the adoption of a directive of the European Parliament and of the Council amending Directive 98/70/EC relating to the quality of petrol and diesel fuels and amending Directive 2009/28/EC on the promotion of the use of energy from renewable sources (10710/2/2014 – C8-0004/2015 – 2012/0288(COD))).

Smart Use of Residues - Exploring the factors affecting the sustainable extraction rate of agricultural residues for advanced biofuels
WWF-World Wide Fund For Nature (with support from Novozymes and EU, 2012)