Use of algae for production of advanced biofuels

The use of algae for the production of advanced biofuels presented by Dominik Behrendt, FZ Jülich, Germany, at EBTP SPM6, October 2014 focuses on the Aufwind Project on biojet fuels from algae.

The AUFWIND project, Germany, was launched in 2013 and involves twelve partners from research and industry, who are developing microalgae as a basis for the production of biokerosene. Key questions addressed are the economic and ecological feasibility of the process. The Federal Ministry of Food, Agriculture and Consumer Protection (BMELV) is funding the project with € 5.75 million via its project management organization FNR (Fachagentur Nachwachsende Rohstoffe). Total funding for the project amounts to some € 7.4 million. 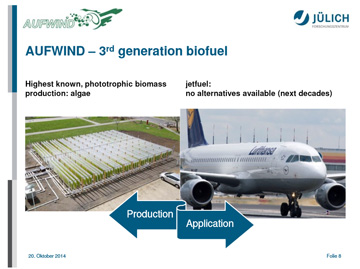