Algal Biofuels R&D and demonstration in Europe and Globally

The EnAlgae project has produced an interactive Map of Algae Initiatives in North West Europe. Currently, the map includes links to over 260 commercial and scientific activities.

Companies and universities involved in algal biofuels R&D&D are listed on the EABA website.

Solazyme abandons algal biofuels, refocuses on food: Solazyme, a Californian algae-based bio-product producer, has abandoned its biofuels business and will be focusing its algae oil production on food and personal care industries. Renamed TerraVia, the company lists the current extremely low oil prices, changing sentiment around the benefits of biofuels, and uncertain US government policies as reasons behind the business restructuring.

Algenol Biofuels has developed a platform for converting CO2 to ethanol at lower cost and higher efficiency (one tonne of CO2 to 144 gallons of fuel / 8,000 gallons per acre per year). The technology, using patented photobioreactors and downstream technology, can be used to produce ethanol, gasoline, diesel or jet fuel. Algenol Technology is being demonstrated in India where Reliance Industries has commenced operations near the Jamnagar Refinery in India. In April 2015, Algenol was part of a US trade mission to China.

Algae Systems LLC and IHI Corp, Japan have demonstrated an integrated process to treat wastewater and produce algae, which is dewatered, converted to bio-oil, and used to produce drop-in biofuel (biojet, biodiesel and biogasoline). Further development of the novel hydrothermal liquefaction process is being funded by a £3.2m grant from the US DoE to a consortium coordinated by Algae Systems (led by SRI International). The algae production technology uses off-shore floating membrane photobioreactors.

Genifuel Corp in Utah is also developing a process for rapidly converting algal slurry into bio-crude, and announced plans for a pilot plant in December 2013.

The University of Greenwich is part of a UK initiative led by Durham University on biofuels production from macroalgae via conversion of wet seaweed to gas. The MacroBioCrude project, supported by a £1.6m grant from the Engineering and Physical Sciences Research Council, will establish an integrated supply and processing pipeline for the sustainable manufacture of liquid hydrocarbon fuels from seaweed. The consortium includes 6 UK universities: Greenwich, Durham, Aberystwyth, Swansea, Harper Adams, and Highlands and Islands, and 6 industrial partners: Johnson Matthey Catalysts, Johnson Matthey Davy Technologies, Silage Solutions Ltd, Shell, and the Centre for Process Innovation (CPI).

In August 2013, Aurora Algae announced it had constructed a demonstration algae cultivation site in Western Australia.

In May 2013, a new $19m demonstration algae biorefinery on Alberta Canada was announced. The Algal Carbon Conversion Pilot Project will use carbon dioxide from oil sands facilities and is a partnership between the National Research Council, Canadian Natural Resources Limited and Pond Biofuels

In the US, ATP3 - a sustainable network of regional test beds - is funded through a $15 million grant from the US Department of Energy. Funding helps support a range of outdoor algae cultivation systems in Arizona, Hawaii, California, Ohio and Georgia, including those for production of advanced biofuels. Partners work both independently and in cooperation with the wider ATP3 network. The PPP is coordinated by Arizona State University - see AzCATI Arizona Centre for Algae Technology and Innovation.

In July 2012, Subitec, Germany, announced an investment of €4.5m for manufacturer of algae photobioreactors.

See Algae Technology (SAT), Austria is to construct a $9.8m biofuels plant using seaweed (macroalgae) for the Brazilian state of Pernambuco (pending approval). The plant will produce up to 1.2m litres of biofuels a year, using carbon dioxide from an adjacent sugar cane to ethanol plant.

In 2011, Abengoa started construction work at the ECOALGA project plant in Cartagena. The 5000m2 experimental plant will be supplied with CO2 generated by the neighbouring bioethanol facility. The project will evaluate strains of microalgae and cyanobacteria, harvesting technique, optimum CO2 concentrations etc, for the production of biofuels and animal feed.

The ECOALGA Project has received funding from the Ministry of Science and Innovation, under the National Plan for Scientific Research, Development and Technological Innovation 2008-2011, managed by the Spanish Institute of Oceanography, within the scope of the Special State Fund For Stimulating the Economy and Employment, Plan E. For the project’s execution, ABNT receives technical support from the National Centre for Renewable Energies (CENER), the University of Murcia, the Polytechnic University of Cartagena and Ecocarburantes Españoles. [Source; Abengoa].

Enalg S.p.A. holds the exclusive rights in Italy for the production of bio-fuel from algae granted by Spanish BFS Biofuel System SL (since 2010 Enalg has been a shareholder of BFS SL). A first industrial pilot plant has been operating in Alicante (Spain) since 2010 for the continuous-cycle production of Blue Petroleum. Construction work has started on the Island of Madeira for the first industrial plant to be implemented in collaboration with the local Government and the Electric Power Supply Agency. CO2 captured from the Cemex cement works will be used to produce biopetrol via microalgae, which are multiplied and transformed through daily treatment cycles. During the first phase of processing high-value nutrients like EPA and omega fatty acids can also be extracted from the biomass. 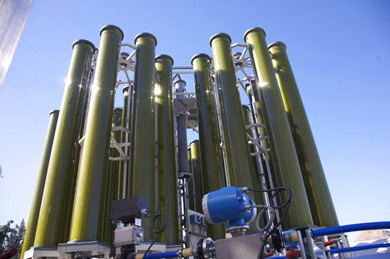 AlgaeLink N.V. and KLM Royal Dutch Airlines are currently cooperating on a pilot project for the development of alternative aviation fuels from algae.

Within the Dutch AlgiCoat initiative (supported via SenterNovem EOS programme) an integral marine biorefinery is being developed for potential production of biodiesel, CHP and chemicals. A small pilot plant has been constructed by AkzoNobel and Essent to demonstrate co-production in principle. Research by WUR-AFSG and Ingrepro is now being carried out to facilitate potential full-scale operation.

In June 2010, the first flight by an airplane using 100% algal biofuels was demonstrated by EADS at the Berlin Air Show. The microalgae oil was produced by Biocombustibles del Chubut S.A. at its plant in Puerto Madryn, Argentina, and then refined and converted into biofuel by VTS Verfahrenstechnik Schwedt in Germany.

EADS has also partnered with IGV GmbH on the use of algae-based biofuels in aviation. An IGV photobioreactor, which multiplies microalgae, was also exhibited at the Berlin Air Show. In 2012, IGV GmbH signed a contract with Bioalgostral SAS (BAO) for the delivery and establishment of an industrial plant for the production of biofuels from microalgae with a total volume of 82000 L [Source: IGV].

FeyeCon D&I BV, Netherlands specialises in the commercialisation of innovative CO2 technology. The company has created two business ventures within the algae sector. Algae Biotech SA creates innovative products and processes in the field of micro-algae, and aims to improve all aspects relating to growing, harvesting, extraction and other downstream processes. It works closely with a sister company Clean Algae SA which specializes in the growing of microalgae at competitive cost, and maintains growing facilities on Grand Canaria.

Reseachers at Western Washington University and Woods Hole Oceanographic Institution have investigated alkenones produced by Isochrysis as an additional source of algal biofuels. Olefin metathesis is used to reduce the chain length of the alkenones, to produce shorter chains suitable for biojet fuel production. Isochrysis also produces fatty acids, which can be converted into biodiesel. The first step in the process is to separate these from the alkenones [Source: WWU Press Release, January 2015].

In 2015, OriginClear Inc. and Idaho National Laboratory of the U.S. Department of Energy announced collaboration on a project to develop OriginClear's Electro Water Separation process to improve the efficiency of algal biofuel production.

Politecnico di Torino (Department of Environment, Land and Infrastructures Engineering), Italy, led the project BioAlma, biofuel from algae for sustainable mobility in urban areas, which ran from 2012-2014. The project focused on optimising the yield of ethanol from conversion of algae.

As part of its System Research programs, ENEL is examining the possibility of producing algae using carbon dioxide emitted by its coal-fired plants.

ENI has operated a small scale algae pilot plant at the Gela Refinery.

Based on research carried out at the University of Alicante, Bio Fuel Systems in Spain has developed a pilot plant for bio-petroleum production.

In June 2010, US D.o.E. announced up to $24M to three projects that aim to commercialize produciton of biofuels from algae:

In January 2010, US D.o.E. announced a $44 million investment in algal biofuels development and demonstration to be carried out by the National Alliance for Advanced Biofuels and Bioproducts (NAABB). Led by the Donald Danforth Plant Science Center (St. Louis, MO), NAABB will develop a systems approach for sustainable commercialization of algal biofuel (such as renewable gasoline, diesel, and jet fuel) and bioproducts. NAABB will integrate resources from companies, universities, and national laboratories to overcome the critical barriers of cost, resource use and efficiency, greenhouse gas emissions, and commercial viability. It will develop and demonstrate the science and technology necessary to significantly increase production of algal biomass and lipids, efficiently harvest and extract algae and algal products, and establish valuable certified co-products that scale with renewable fuel production. Co-products include animal feed, industrial feedstocks, and additional energy generation. Multiple test sites will cover diverse environmental regions to facilitate broad deployment.

In July 2009, Exxon Mobil Corporation announced an alliance with leading biotech company, Synthetic Genomics Inc. (SGI), to research and develop next generation biofuels from photosynthetic algae. Under the program, if research and development milestones are successfully met, Exxon Mobil expects to spend more than $600 million, which includes $300 million in internal costs and potentially more than $300 million to SGI.

In December 2007, Royal Dutch Shell plc and HR Biopetroleum (now Cellana) formed a joint venture Cellana for the construction of a pilot facility in Hawaii to grow marine algae and produce vegetable oil for conversion into biofuel.

In October 2007, it was announced that Chevron and NREL scientists would collaborate to identify and develop algae strains that can be economically harvested and processed into finished transportation fuels such as jet fuel. Chevron Technology Ventures, a division of Chevron U.S.A. Inc., was funding the initiative.

In July 2009, a paper on Life-Cycle Assessment of Biodiesel Production from Microalgae by Laurent Lardon et al, INRA, UR50 Laboratoire de Biotechnologie de l’Environnement, France was published in Environmental Science and Technology.

A Review of the Potential of Marine Algae as a Source of Biofuel in Ireland (2.5 Mb PDF) was commissioned by Sustainable Energy Ireland in order to provide an overview of marine algae as an energy resource, from either macroalgae or microalgae. Tentative roadmaps based on high, medium and low scenarios are included for development of these resources by 2020.

The Sustainable Fuels from Marine Biomass project, Biomara, was a UK and Irish joint project that aims to demonstrate the feasibility and viability of producing third generation biofuels from marine biomass. It will investigate the potential use of both macroalgae and microalgae as alternatives to terrestrial agri-fuel production.