Overview of biofuels in Canada - from feedstock to end use

Presentation on biofuels development in Canada and the US, EBTP SPM6, October 2014

Biofuels development in Canada and the US
Don Smith, BiofuelsNet Canada 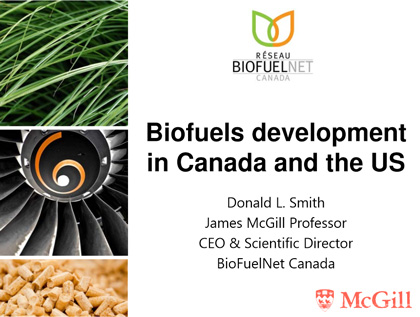 Canada is also a world leader in pyrolysis of lignocellulosic materials.

In June 2014, Enerkem inaugurated its commercial MSW-to-ethanol facility in Edmonoton, Canada. Enerkem, through its affiliate Enerkem Alberta Biofuels, signed a 25-year agreement with the City of Edmonton to build and operate the plant that will produce and sell next-generation biofuels from non-recyclable and non-compostable municipal solid waste (MSW).

VANERCO, a joint venture between Enerkem and GreenField, plans to develop a cellulosic ethanol plant at the GreenField ethanol plant in Varennes, Quebec. In September 2013 it was announced that the project will receive some initial funding from the SDTC NextGen Biofuels Fund.

In June 2012, Enerkem started production of cellulosic ethanol from waste at its pre-commercial demo facility in Westbury, Québec, which uses an innovative thermochemical conversion technology.

In January 2014 Iogen announced a new method to produce drop-in biofuels from biogas. It plans to introduce the technology (alongside ethanol production) at its CE plants to increase overall production efficiency. In November 2013, it was announced that construction had started on a 10MMgy facility in Brazil using cellulosic ethanol technology of Iogen Energy, a joint venture of Raízen and Iogen Corp.. On April 30, 2012 Royal Dutch Shell and Iogen laid off 150 employees at Iogen's headquarters in Ottawa. Plans for a 10 MMgy cellulosic ethanol plant in Manitoba were suspended.

Shell had previously worked with Iogen (and Codexis) and the federal government to get Canada’s first commercial scale cellulose ethanol facility into production. Sustainable Development Technology Canada (SDTC), has been actively engaged in the transition of Iogen technology from development to commercialization.

A Shell service station in Canada was the first in the world to sell Gasoline blended with 10% Cellulosic Ethanol from Wheat Straw. For one month starting June 10 2009, the regular gasoline purchased at a Shell service station in Ottawa, Ontario contained 10% cellulosic ethanol. The biofuel was produced locally from non-food raw materials at Iogen Energy Corporation’s demonstration plant, using advanced conversion processes. Iogen and Shell are partners in the plant, which now produces 40,000 litres of fuel per month.

In Canada, the NextGen Biofuels Fund™, aimed to bring biodiesel and cellulosic etahnol projects to market sooner by helping them bridge the high CAPEX (capital expenditure) gap to scale-up their technology solution to a large, demonstration-scale plant.

Reports related to biofuels in Canada