A number of research projects and companies are developing innovative processes to turn a wide range of biomass (forestry residues, crop residues, waste paper and organic waste) into stable, concentrated bio-oil (biocrude) that is compatible with existing refinery technology and can be converted into advanced biofuels.

For example, in the HTU® (hydrothermal upgrading) process, originally developed by Shell, biomass is treated with water at high temperature and pressure (300-350°C & 120-180 bar) to produce bio-crude. This can be separated by flashing or extraction to heavy crude (suitable for co-combustion in coal power stations) and light crude, which can be upgraded by hydrodeoxygenation (HDO) to advanced biofuels (Source: Biofuel BV presentation).

Updates on fast pyrolysis are included on the PyroKnown website, which is dedicated to sharing knowledge and learning about biomass fast pyrolysis. See PyroWiki, PyroWebinar, PyroMovies.

In January 2014, a REACH Fast Pyrolysis Bio-Oil (FPBO) consortium was formed in Europe, and determined the following definition for FPBO: "Liquid condensate recovered by thermal treatment of lignocellulosic biomass, at short hot vapour residence time (typically less than about 10 seconds) typically at between 450 - 600°C at near atmospheric pressure or below, in the absence of oxygen."

The consortium is managed by Linnunmaa Oy and the lead registrant is Fortum.

CEN/TC 19/WG 41 is currently developing standards for fast pyrolysis oils in response to EC mandate M/525 (2013). Three standards will be developed for replacement of heavy fuel oil, light fuel oil and for use of bio-oils in stationary combusiton engines. Later, two furtrher technical specifications may also be introduced for use of fast pyrolysis oils as gasfication feedstocks and for mineral oil refinery co-processing, as and when required.

In March 2014, it was announced that Fortum, UPM and Valmet will work together on a five-year project LignoCat (Lignocellulosic Fuels by Catalytic Pyrolysis) to develop and commercialize integrated catalytic pyrolysis technology to produce biofuels from cellulosic feedstocks. The project is funded by Tekes - the Finnish Funding Agency for Technology and Innovation.

In March 2012, Fortum, Finland announced an investment of ~ EUR 20 million to build a bio-oil plant, based on fast pyrolysis technology, connected to the Joensuu CHP plant, which will be the " first of its kind in the world on an industrial scale."

The integrated plant aims to produce electricity and district heat and 50,000 tonnes of bio-oil per year. The bio-oil raw materials include forest residues and other wood based biomass. Construction of the bio-oil commenced during 2012, and the plant started production in November 2013. Bio-oil production will increase the energy wood consumption at Joensuu power plant almost doubling the use from the existing 300,000 m3 per year. Savon Voima will begin using the bio-oil in its standby heat station in Iisalmi, Finland, at the start of 2014. [Source: Fortum] 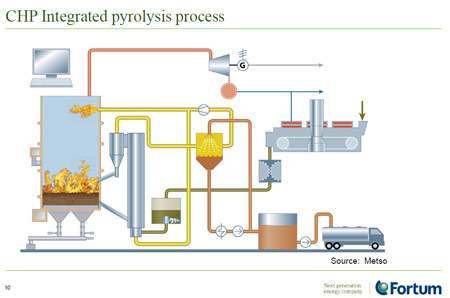 On 20 May 2015, BTG - Biomass Technology Group BV announced the opening of the Empyro 25 MWth polygeneration pyrolysis plant to produce electricity, process steam and fuel oil from woody biomass. In January 2014 Empyro BV has started construction of its pyrolysis oil production facility in Hengelo, the Netherlands. Start-up of the installation commenced in early 2015 and production is gradually being increased. Empyro BV is jointly owned by BTG BioLiquids, Tree Power, the province of Overijssel and a private investor. The project was initially supported by the EC FP7 Empyro project.

BTG's fast pyrolysis technology was originally based on the rotating cone reactor (RCR). Biomass particles at room temperature and hot sand particles are introduced near the bottom of the cone, where the solids are mixed and transported upwards by the rotating action of the cone. In the current process 70 wt.% bio-oil and 30 wt.% char and gas are produced as primary products [Source: BTG].

NER300 projects in Estonia and Latvia

The bioCRACK process represents a new biomass-to-liquid concept to generate advanced biofuel by liquid-phase pyrolysis. A liquid heat carrier vacuum gas oil (VGO), an intermediate heavy oil product from the vacuum distillation, is used. From autumn 2012 a fully integrated pilot plant at Schwechat Refinery, Austria, with a nominal biomass capacity of 100 kg/h, was in continuous operation, generating data for up-scaling the technology to an industrial scale.

Recent developments in fuels and chemicals from pyrolysis are regularly published by PyNe IEA Bioenergy Task 34 on Pyrolysis (which evolved from the Pyrolysis Network).

CASCATBEL - CAScade deoxygenation process using tailored nanoCATalysts for the production of BiofuELs from lignocellullosic biomass aims to design, optimize and scale-up a novel multi-step process for the production of second-generation liquid biofuels from lignocellulosic biomass in a cost-efficient way through the use of next-generation high surface area tailored nano-catalysts (FP7).

ExxonMobil announced in October 2014 it is establishing two research projects with Iowa State University on fast pyrolysis of biomass. CENUSA Bioenergy, led by Iowa State University and supported by a $25m funding from USDA National Institute of Food and Agriculture, previously developed fast pyrolysis technology to convert energy grasses into bio-oil for production of advanced biofuels.

In February 2015, the Australian Renewable Energy Agency announced $5.2m funding for the Renergi pilot bio-oil facility in Perth. The $12.9m project aims to be operational be end of 2017.

Researchers at Purdue University, US, have demonstrated a new method to produce bio-oil via fast-hydropyrolysis-hydrodeoxygenation (H2Biooil), which involves adding hydrogen to the biomass-processing reactor, and uses a new platinum-molybdenum catalyst and innovative reactor design. Biomass along with hydrogen is fed into a high-pressure reactor and heated rapidly (within a second) to 500° C. The technique has proved succesful at lab scale with a wide variety of biomass. The researchers previously invented an approach called "hybrid hydrogen-carbon process" or H2CAR [Source: Rakesh Agrawal et al, Purdue University].

In 2013 the Agricultural Research Service (ARS) was awarded a $6.86 million Biomass Research and Development Initiative (BRDI) grant from the National Institute of Food and Agriculture (NIFA) to lead a 14 member industry/ university consortium on the “FarmBio3“ project 'Distributed On-Farm Bioenergy, Biofuels and Biochemicals Development and Production via Integrated Catalytic Thermolysis'.

The Fraunhofer UMSICHT Department of Biorefinery and Biofuels, is also investigating the potential for on-farm conversion of biomass residues to bio-oil.

In the United States, KiOR (now Inaeris Technologies) developed a proprietary (catalytic pyrolsis) technology platform to convert biomass feedstocks into renewable crude oil, which can be converted, using standard refinery equipment, into gasoline, diesel and fuel oil blendstocks. KiOR developed a commercial facility in Columbus, Mississippi. In March 2014, KiOR announced that it would idle the Columbus plant due to financial difficulties. In November 2014, KiOR Inc. filed a voluntary petition for Chapter 11 bankruptcy (the filing does not include the Columbus biorefinery).

Pacific Northwest National Laboratory is invesigating the "reaction blocking" effects of the bio-product phenol when upgrading bio-oil to biofuels via catalysts. Researchers found that phenol is converted to ketones, which form long chains and slow down reactions on the surface of the metal catalysts. Water molecules were found to play an important role in the formation of ketones.

In April 2013, Mercurius Biorefining received $4.6m funding from US DOE for a pilot plant to demonstrate its patent-pending Renewable Acid-hydrolysis Condensation Hydrotreating (REACH) technology to produce 'green crude' as an intermediate for advanced biofuel production. The company produces diesel and jet fuel hydrocarbons through a solid-bed-catalytic process analogous to that used for conversion of crude in the petroleum industry.

In April 2012, US DoE announced up to $15m funding for demonstration of biomass-based oil precursors (biocrude) for renewable transportation fuels.

The University of Massachusetts Amherst has granted exclusive global rights to Anellotech for its catalytic fast pyrolysis (CFP) technology for producing biogasoline and other biohydrocarbon fuels from waste biomass.

The Pyrogrot project, Sweden (previously selected for NER300 funding) to be discontinued

On 16 December 2013, BillerudKorsnäs announced that it would not continue to develop the Pyrogrot project. The company's press release stated that: "Technical solutions are at hand for the production of pyrolysis oil but the commercial environment at current conditions, and as assumed in the short to mid-term future development, is not solid enough."

On 18 December 2012 it was announced that Pyrogrot project, Sweden, has been selected to receive counterpart funding of €31.4m under the first call for proposals of the NER300 funding programme for innovative low-carbon technologies. The Project concerns the construction and operation of a plant for the production of pyrolysis oil using forest residues as feedstock. The design capacity was 160000 t/year of pyrolysis oil with the energy content estimated at about 750 GWh.