Tall oil is a residual product of the pulp and paper industry, is also being used to produce biodiesel. The first commercial-scale facilities are being developed in Europe.

In 2017 UPM Biofuels commissioned a study from Ecofys  "Crude tall oil low ILUC risk assessment: comparing global supply and demand". The study looked into crude tall oil (CTO) availability, current usage, whether the feedstock creates an additional demand for land, and whether the use of CTO in advanced biofuels can cause distortive effects in the markets.

View presentation made at EBTP SPM6, October 2014, by Sari Mannonen, UPM Biofuels on Biorefinery for production of advanced wood-based biofuels. 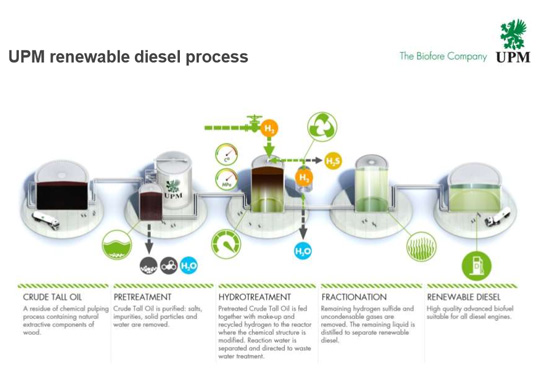 In November 2012 UPM announced that it had commenced construction of a biorefinery producing biofuels from crude tall oil at UPM’s Kaukas mill site in Lappeenranta, Finland. This followed an initial announcement of the project in 1 February 2012. The industrial scale investment is the first of its kind globally. The biorefinery will produce annually approximately 100,000 tonnes of advanced biodiesel. UPM’s total investment will amount to approximately EUR 150 million. UPM has not applied for a public investment grant for the project. 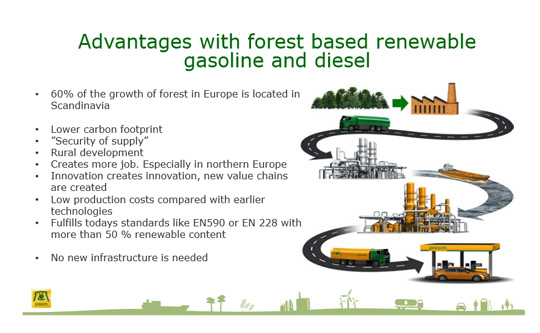 SunPine AB has pioneered a "Wood to Wheel" renewable diesel process technology using crude tall oil, a residual product of the pulp and paper industry, as feedstock. The company, created in 2006, is owned by Preem, Sveaskog, Södra and KIRAm AB, and operates a €23 million plant in Piteå.

Tall oil can be extracted from pine, spruce and birch. During the pulping process resinous substances in the wood are dissolved and form calcium soaps. This soap is skimmed from the black liquor and subsequently washed and acidified to form crude tall oil. The yield of tall oil diesel from the crude tall oil is high, up to 65-70 percent. The remaining 30-35% becomes pitch fuel, a renewable fuel oil which is returned to the pulp mills. Also other residual products such as sodium and sulfur are returned to a pulp mill. The SunPine production process does not generate any waste. In the future it is also planned to extract other useful substances, such as resin acids and sterols.