Introduction and basic data on ethanol

State of the Art for ethanol production

Major stakeholders in ethanol in the EU

Ethanol, also known as ethyl alcohol, pure alcohol, grain alcohol, or drinking alcohol, is often abbreviated as EtOH. EtOH is a light alcohol and is a volatile, colourless, flammable liquid with a characteristic odour. EtOH burns with an almost invisible flame and is biodegradable.

Without proper conditions, EtOH attracts water while stored. Another important feature of EtOH is the formation of an azeotropic mixture with water. 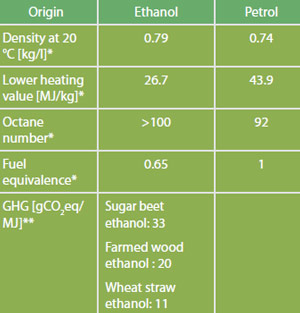 EtOH is a naturally widespread chemical, produced by ripe fruits and by wild yeasts or bacteria through fermentation. Ethanol from biomass can be produced from any feedstock containing appreciable amounts of sugar or materials that can be converted into sugar. Fermentation (biotechnology) is the predominate pathway for EtOH production. Biomass can also be converted to EtOH via biotechnological and thermochemical pathways.

The most common raw materials are sugar cane and corn, and in temperate climates also sugar beet, wheat or potatoes. The overall fermentation process starting from glucose is:

Naturally, the underlying biochemical processes are much more complicated. Adapted yeasts, for example Saccharomyces cerevisiae are used and fermentation can be carried out with or without the presence of oxygen. With oxygen some yeasts are prone to respiration, the conversion of sugars to carbon dioxide and water. As EtOH is a toxin, there is a limit to the maximum concentration in the brew produced by the yeasts. This results in a high energy demand for EtOH purification by distillation.

In industrial processes an efficiency of about 90 to 95 % of theoretical yields can be reached. But, unmodified yeast will only convert sugars with 6 carbon atoms. As sugars with 6 carbon atoms are only a part of the biomass the overall conversion efficiency is much lower. To enable the use of a wider range of biomass components, processes that also convert sugars with 5 carbon atoms are under development. Larger compounds in biomass (cellulose and hemicellulose) must first be broken down into fermentable sugars and lignin, which is currently not a candidate feedstock for EtOH.

Non-biotechnological methods for production of EtOH have been developed. EtOH from chemical conversion routes is called synthetic ethanol. The most common chemical process for EtOH production is the acid-catalyzed hydration of ethylene:

Ethylene is obtained from petrochemical feedstocks. Phosphoric acid is mostly used as a catalyst.

EtOH can also be produced from synthesis gas through chemical synthesis. In addition, certain microorganisms are able to digest synthesis gas to produce ethanol.

As an alternative to using sugar- and/or starch-based biomass, R&D is focused on advanced processes that use lignocellulosic materials as feedstocks. These processes have the potential to increase the variety and quantity of suitable feedstocks, including cellulosic and food-processing wastes, corn stovers and cereal straws, as well as dedicated fast-growing plants such as poplar trees and switch-grasses. Advanced processes include biomass pre-treatment to release cellulose and hemicellulose, hydrolysis to fermentable 5- and 6-carbon sugars, sugar fermentation, thermal conversion of solid residues and non-hydrolysed cellulose, and distillation of ethanol to fuel grade. In order to provide better conversions, new pretreatment schemes and innovative enzymatic processes have been investigated.

One of the more sophisticated solutions is the so-called “lignocellulosic feedstock biorefinery (LCF biorefinery)” which uses lignocellulosic biomass, for example wood from short rotation forestry or energy crops like Triticale. Besides EtOH, in theory, a broad range of intermediate chemicals could be produced from a LCF biorefinery.

Today in Europe some pilot or demonstration plants are running or are being commissioned.

Due to significant investments in funding by the EU and by industry the technology for production of lignocellulosic biomass to EtOH is available, but a proper regulatory framework is needed to promote and support technology deployment at commercial scale.

Low-percentage ethanol-gasoline blends (E5, E10) can be effectively used in most conventional spark-ignition engines with no technical changes, while modern flexi-fuel vehicles (FFV), which can run on any gasoline-EtOH mixture up to 85% EtOH (E85), are made with just a few modifications during production. The use of alcohol fuels, such as ED95, in heavy duty applications is also implemented on a limited scale.

EtOH has a series of technical advantages as a fuel for spark-ignition engines. First, EtOH has a very high octane number. This gives the fuel a strong resistance to knock which translates into the possibility of optimizing the engine by increasing compression ratio and advancing spark. Second, EtOH has a high heat of vaporization, enabling an air-cooling effect. This enhances the filling efficiency, partly offsetting its lower energy content per litre. Finally, the presence of oxygen in the ethanol molecule provides a more homogeneous fuel-air mix formation and permits low-temperature combustions with a consequent decrease in unburned or partially burned molecule emissions (HC, CO, and NOx).

Despite these advantages, some negative properties have also to be considered. Firstly, the oxygen content leads to an increase in the fuel volumetric consumption and, due to its ability to oxidize into acetic acid, causes compatibility issues with some materials used in the engine, such as metals or polymers. Ethanol may also contain metallic ions and other impurities that enhance aggressiveness towards materials. Secondly, the high latent heat of vaporization can cause running difficulties in cold conditions, especially cold start. Finally, EtOH leads to azeotropes with light hydrocarbon fractions and can cause volatility issues. It is miscible with water, which can cause demixing issues when blended with hydrocarbons, and implies acetaldehyde emissions.

Some major bioethanol stakeholders in the EU are listed below: