Various pathways can be used to convert fats and oils (oil crops and waste oils) to liquid transport fuels: 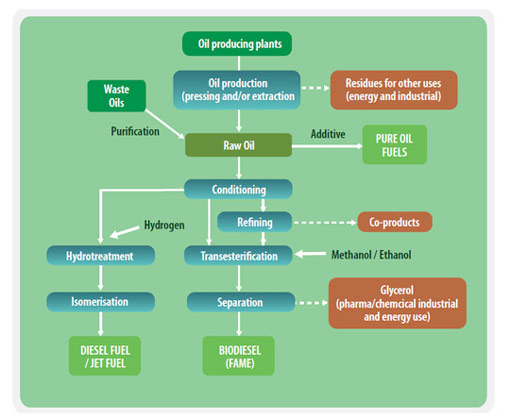 Transesterification is a reversible reaction and is carried out by mixing the reactants. A strong base or a strong acid can be used as a catalyst. At the industrial scale, sodium or potassium methanolate is mostly used.

The end products of the transesterification process are raw biodiesel and raw glycerol. After a cleaning step biodiesel (FAME) is produced. The purified glycerol can be used in the food and cosmetic industries, as well as in the oleochemical industry. The glycerol can also be used as a substrate for anaerobic digestion.

See the biodiesel page for updates on biodiesel RTD and process innovation.

Chemical reaction of vegetable oils, animal-based waste fats, and by-products of vegetable oil refining with hydrogen produces hydrocarbons with properties superior to conventional biodiesel and fossil diesel. The product is sulfur-, oxygen-, nitrogen- and aromatics-free diesel which can be used without modification in diesel engines. These diesel-type hydrocarbons, also referred to as Hydrotreated vegetable oil (HVO) or a renewable diesel, can even be tailored to meet aviation fuel requirements. Companies applying this type of technology include NesteOil and Dynamic Fuels.

For the decarboxylation process, crude fat feedstock is first converted into fatty acids and glycerol. The fatty acids are then put through catalytic decarboxylation, a process which decouples oxygen without using hydrogen. The process is capable of processing unsaturated as well as saturated fatty acids into true hydrocarbons. What makes the process unique is that it does not change the type of saturation. This is what makes the production of renewable olefins possible. However, when necessary to create fuels from unsaturated fats, introduction of a small amount of hydrogen during the catalytic decarboxylation step will readily yield a saturated hydrocarbon ideally suited for fuels. The company Alipha Jet is developing this technology.

Crude glycerine (residue from biodiesel plants) is purified, evaporated and cracked to obtain syngas (synthesis gas), which is used to synthesise methanol. Methanol is an extremely versatile product, either as a fuel in its own right or as a feedstock for other biofuels. It can be used as a chemical building block for a range of future-oriented products, including MTBE, DME, hydrogen and synthetic biofuels (synthetic hydrocarbons). The company BioMCN is applying this technology.