Other types of biochemical conversion include : 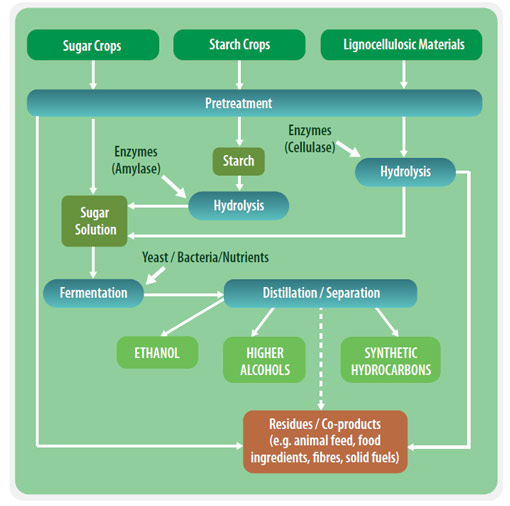 See the cellulosic ethanol page for details of commercial demonstrations and reseach in areas such as valorization of C5 sugars and lignin.

In contrast to the traditional bioethanol production from sugar and starch, production based on lignocellulosic material requires additional processing steps. The reason is that the cellulose (source of C6 sugars such as glucose) as well as hemicellulose (mainly source of C5 sugars such as xylose) is not accessible to the traditional bioethanol producing micro-organisms.

See the pretreatment page for further information and links.

Cellulose is chemically very stable and extremely insoluble. Although acid hydrolysis of the celluloses is possible and has been applied previously, the current state-of-art method is enzymatic hydrolysis by a cellulase enzyme complex produced for example by the fungus Trichoderma reesei. The complex is composed by three proteinic units: endocellulase breaks the crystalline structure to generate shorter chain fragments; exocellulase works on (14) glucosidic bonds of linear cellulose to release cellobiose (it is composed by two sugar units); cellobiase (or β-glucosidase) finally works on cellobiose and splits off glucose to make the material suitable for fermentation.

In contrast to the crystalline structure of cellulose, hemicellulose has a mainly amorphous structure. This results in a significantly easier way of hydrolysis. The hydrolysis of hemi-celluloses may be performed by diluted acids, bases or by appropriate hemi-cellulase enzymes. In several process set-ups the hydrolysis already happens in the pretreatment step.

Yeast fermentation to ethanol and upgrading

Fermentation of the C5 and C6 sugars obtained from pretreatment and hydrolysis of lignocellulose faces several challenges:

Currently there are two basic R&D strategies in the field of fermentation: either ethanologens like yeasts are used and the ability to use C5 sugars is added to them, or organisms capable of using mixed sugars (such as E. coli) are modified in their fermentation pathway in order to produce bioethanol. Further research activities focus on inceasing robustness to inhibition as well as fermentation temperature.

The upgrading of ethanol from lower concentrations in beer to the required 98.7%m/m is performed employing the following known and widely applied technological steps:

Particularly in case of enzymatic hydrolysis, various overall process integrations are possible. In all cases a pretreatment is required. The subsequent processing steps differ in the alignment of the hydrolysis C5 fermentation and C6 fermentation steps. It is clear, that in the practical implementation there will be various modifications to the mentioned methods, however, typical processes can be defined as:

The SSCF - Simultaneous Saccharification and Co-Current Fermentation set-up is currently the best developed lignocellulose processing method where hydrolysis and C5 and C6 fermentation can be performed in a common step.

The CBP - Consolidated BioProcessing (previously also called DMC - Direct Microbial Conversion), though, envisages a unique step between pretreatment and distillation, unifying cellulase production, C5 and C6 hydrolysis and C5 and C6 fermentation. From today’s point of view, the establishment of CBP would mark a significant step forward, in terms of efficiency and simplicity of the process, yet it requires further research and development.

Microbial fermentation of sugars can – in contrast to the more commonly used yeast fermentation to ethanol – also use an acetogenic pathway to produce acetic acid without CO2 as a by-product. This increases the carbon utilization of the process. The acetic acid is converted to an ester which can then be reacted with hydrogen to make ethanol.
The hydrogen required to convert the ester to ethanol can be produced through gasification of the lignin residue. This requires fractionation of the feedstock into a sugar stream and a lignin residue at the beginning of the process. This process is applied by ZeaChem.

Engineered yeast can be used to convert sugar into a class of compounds called isoprenoids which includes pharmaceuticals, nutraceuticals, flavors and fragrances, industrial chemicals and chemical intermediates, as well as fuels. One of these isoprenoids is a 15-carbon hydrocarbon, beta-farnesene.

Beta-farneses can be chemically derivatized into a variety of products, including diesel, a surfactant used in soaps and shampoos, a cream used in lotions, a number of lubricants, or a variety of other useful chemicals. This process is applied by Amyris.

Due to an excess of ethanol in the US and Brazil (the 'blend wall') there is significant interest in the production of butanol for use as a biofuel. Yeast can be engineered to produce butanol instead of ethanol. Butanol may serve as an alternative fuel, as 85% Butanol/gasoline blends can be used in unmodified petrol engines. Several companies are developing butanol-production technologies including: Gevo, Butamax™ Advanced Biofuels, Abengoa, Green Biologics, Cobalt Technologies, Tetravitae Bioscience and METabolic EXplorer.

See the butanol page for details of the latest R&D&D developments and fuel standards for butanol.

Combining thermochemical and biochemical technologies, gas produced through biomass gasification may be converted into alcohols in a fermentative process based on the use of hydrogen, carbon monoxide and carbon dioxide. Beside alcohols such as ethanol and butanol, other chemicals such as organic acids and methane can be obtained. The main advantage of the microbiological processes is the mild process conditions (similar to biogas production); also, the low sensitivity of the microorganisms towards sulphur decreases the gas cleaning costs. The main disadvantage is the limited gas-to-liquid mass transfer rate requiring specific reactor designs. Companies developing this type of process include Coskata, INEOS and LanzaTech.

Cellulose and hemicellulose are most conveniently used for energy production with a conversion rate of up to 100%. Lignin represents a residue in the sugar fermentation system for ethanol production, as microorganisms can metabolize only sugars (which form cellulose and hemi-cellulose) but not aromatic alcohols (which are the main component of lignin).

Lignin can be deployed for energy production through combustion, gasification or pyrolysis, (working methods are described in chapter 3.3). Furthermore, it is a good feedstock for chemicals and materials manufacturing, utilising lignin as it is or after depolymerisation. Lignin has a high reactivity and a high binding capacity making it a good stock for materials and macromolecules modifications and manufacturing. Due to its complexity of structure, it can also be depolymerised gaining a lot of different compounds.

See further links and information on valorization of lignin on the cellulosic ethanol page.