The latest news and information on development of hydrogen technology in Europe is available from the Fuel Cells and Hydrogen Joint Undertaking (FCH JU) a unique public private partnership supporting research, technological development and demonstration (RTD) activities in fuel cell and hydrogen energy technologies in Europe. Its aim is to accelerate the market introduction of these technologies.

Also see the BioHydrogen Platform which offers a dedicated environment for sharing information on biological production of hydrogen from biomass and communication on hydrogen topics. It provides access to various (inter)national Biohydrogen projects and the activities of The International Association of Hydrogen Energy and The Netherlands Biohydrogen Network.

Hydrogen for use as a transport fuel can be produced from fossil fuels as well as renewable sources (biohydrogen).

Biohydrogen may produced by steam reforming of methane (biogas) produced by anaerobic digestion of organic waste. In the latter process, natural gas and steam react to produce hydrogen and carbon dioxide.

Biohydrogen may also be produced by fermentation. Fermentation of renewable materials by bacteria may take place in light (photofermentation) or in the absense of light (dark fermentation). Research is focused on increasing yields of biohydrogen from various strains of bacteria.

In the US, researchers at Penn State University in the US, have developed a microbial electrolysis cell to produce hydrogen from renewable resources. The method uses bacteria called "exoelectrogens" to break down acetic acid - produced by fermenting cellulose, glucose or other organic matter. See: Abstracts from Microbial Fuel Cells: First International Symposium.  The Pennsylvania State University, University Park, PA.  May 27-29, 2008.

Production of biohydrogen by algae

Algae (e.g. Chlamydomonas reinhardtii) also produce hydrogen under anaerobic conditions, and novel techniques are also being developed to increase yields via this route.

BIOHYDROGEN: A novel bioprocess for hydrogen production from biomass for fuel (FP5 - QLK5 - 01267)

US Research on hydrogen from sustainable resources

Currently most hydrogen is produced from fossil fuels (e.g. steam reforming of natural gas). Prototype hydrogen vehicles have been developed, but there is currently no significant infrastructure for distributing hydrogen as a transport fuel, and in-vehicle storage capacity is still an issue. In addition, hydrogen fuel cells are expensive to produce and fragile, and have a relatively short service life. Extensive research is being carried out on chemical storage of hydrogen.

Use of hydrogen in combustion engines

BMW has developed liquid-hydrogen combustion engines and released a limited run of 100 bivalent (gasoline/hydrogen) BMW Hydrogen 7 cars to demonstrate technical feasibility. There are no immediate plans for larger-scale production. 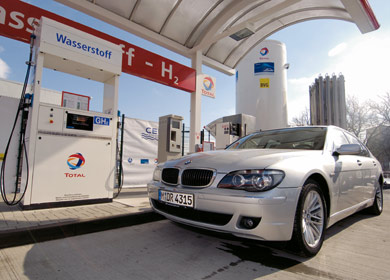