Dimethyl ether (DME) can be produced by catalytic dehydration of methanol, or from syngas. Above -25°C or below 5 bar, DME is a gas. Hence its use as a transport fuel is similar to that of LPG.

The FLEDGED project will deliver a process for bio-based dimethyl ether (DME - ethanol) production from biomass by combining the processes of flexible sorption enhanced gasification (SEG) and a novel sorption enhanced DME synthesis (SEDMES).  The primary aim of FLEDGED is to develop a highly intensified and flexible process for DME production from biomass and validate it in the industrial environment (technology readiness level 5). Duration: 2016 - 2020.

The initial BioDME project to demonstrate production of BioDME from lignocellulosic biomass at industrial scale, involved a consortium of Chemrec, Haldor Topsøe, Volvo, Preem, Total, Delphi and ETC. The project was supported by the Swedish Energy Agency and the EU's Seventh Framework Programme. Dimethylether (DME) was produced from black liquor through the production of clean synthesis gas and a final fuel synthesis step. In order to check technical standards, commercial possibilities and engine compatibilities the BioDME has been tested in a fleet of Volvo trucks.

In February 2013, Luleå University of Technology's holding company took over Chemrec and its gasification plant. LTU is entering a long-term partnership with Chemrec and also the Danish company Haldor Topsö, a world leader in catalytic processes. In addition, there is a related consortium being formed by both industrial and public actors.

The signing took place in Stockholm in the presence of the prime ministers of China, Wen Jiabao, and of Sweden, Fredrik Reinfeldt. Under the agreement, Chemrec and TCC will develop an offering to provide industry standard design, engineering, procurement and construction (EPC) services as well as overall performance guarantees to support project financing for black liquor gasification plants. TCC will also assist in procuring plant financing [Source: Chemrec].

Previously, in January 2011, the EU approved a grant of up to SEK 500 million (49 million, $73 million) by the Swedish Energy Agency for industrial scale demonstration of the Chemrec technology for production of BioDME and Biomethanol. The plant was scheduled to be built at the Domsjö Fabriker biorefinery in Örnsköldsvik. This follows the original approval of the investment grant by the Swedish Energy R&D Board in September 2009. However in May 2012, Domsjö withdrew from the black liquor gasification demonstration.

The Domsjö plant aimed to supply well over 2000 heavy trucks with fuel. With fully implemented renewable fuels production at all pulp mills in Sweden, half of all heavy road transport could be propelled by BioDME and biomethanol. Potentially, this could reduce Swedish fossil carbon dioxide emissions by 10% or about 6 million tons and replace fossil fuel imports worth approx. SEK 10 billion (1 billion, $1.5 billion) annually. However, this relies on securing further sources of investment and a supportive framework for commercial-scale production of BioDME in Sweden. 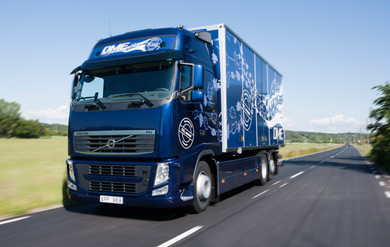 On September 18, 2009, His Majesty King Carl XVI Gustaf of Sweden broke ground for the world's first BioDME production plant at the Smurfit Kappa paper mill in Piteå, Sweden. The pilot plant was inaugurated in 2010 with a capacity of about 4 tons (1,600 gallons) per day using forest residues as feedstock. The estimated cost of the plant was around SEK 150 million (EUR 14 million, USD 20 million).

In October 2010 Chemrec was named a GoingGreen Silicon Valley Top 100 Winner and was also included in the prestigious 2010 Global Cleantech 100. 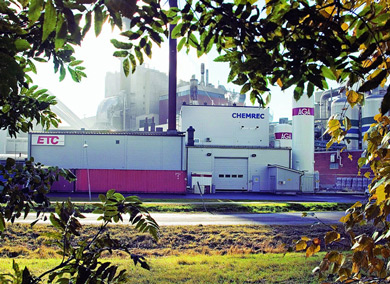