Use of Biofuels in Shipping

R&D&D projects and initiatives on biofuels in shipping

Overview on alternative fuels for use in shipping

References and reports on use of biofuels in shipping

The Sustainable Marine Methanol (SUMMETH) project has the overall objective of advancing the technological development and providing recommendations for introduction of methanol as an alternative fuel for coastal and inland waterway vessels to reduce their emissions and carbon footprint. The project intends to investigate methanol combustion concepts and ship fuel systems that will lead to cost effective alternatives for ship operators to reduce their emissions and carbon footprint.

The world’s first ocean-going ships capable of operating on methanol are about to be delivered to operator Waterfront Shipping Co. In a ground breaking event, three methanol-propelled tankers were delivered in April 2016 from South Korean and Japanese shipyards. Another four methanol-burning ships are scheduled to enter service in October 2016.

The seven 50,000 dwt product tankers will be used to replace older vessels and expand Waterfront’s fleet of methanol carriers. The new ships each have MAN B&W’s dual-fuel, two-stroke engines ME-LGI, which can run on methanol, fuel oil, marine diesel oil or gasoil. Two of the vessels will be owned by Westfal-Larsen Management (WL), three by Mitsui OSK Lines (MOL) and the other two by a joint venture between Marinvest and Skagerack Invest and Waterfront. The ships are constructed by Hyundai Mipo Dockyard and Minaminippon Shipbuilding Co.

In March 2015, Stena Line launched the world’s first methanol powered ferry, the Stena Germanica, on the Kiel–Gothenburg route. The Stena Germanica’s fuel system and engines have been adapted in the Remontova shipyard Gdansk, Poland, in a collaboration between Stena Line and Wärtsilä. The cost of the project was 22M Euros with 50% support from the EU Motorways of the Seas project. Dual fuel technology is used, with methanol as the main fuel, but with the option to use Marine Gas Oil (MGO) as backup.

View presentation made at EBTP SPM6, October 2104, by Per Stefenson, Stena Rederi AB on the use of biofuels in the maritime sector. 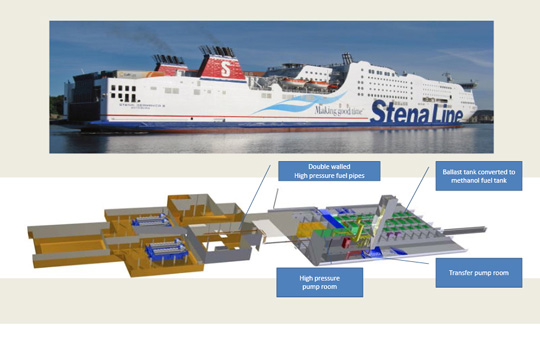 TEN-T Project on Methanol: the marine fuel of the future

The TEN-T programme consists of hundreds of projects – defined as studies or works – whose ultimate purpose is to ensure the cohesion, interconnection and interoperability of the trans-European transport network, as well as access to it. As part of Priority Project 21: Motorways of the Seas, pilot tests on Methanol as a marine fuel of the future will be carried out on the passenger ferry Stena Germanica operating between the ports of Gothenburg and Kiel. The Stena Germanica is the world's second largest Ro-Pax ferry. The running of the Stena Germanica on methanol will allow the vessel to comply with the new Sulphur Emission Control Area rules ahead of the 2015 deadline.

The 22M Euro project is receiving 50% funding under the EC TEN-T programme. The project particpants consist of Stena Aktiebolag, Wärtsilä Finland OY, Stena Oil AB, Port of Kiel and Göteborgs Hamn AB. The engine supplier is MAN and methanol will be supplied by Methanex.

The proposed "action" will provide the real "live test" to prove the feasibility of methanol as a future fuel for shipping, deliver the engine conversion kit which can be further implemented on other ships, and provide the important and ultimate piloting culmination of many years of research. In addition to retrofitting the vessel, the pilot action will also create the appropriate port infrastructure for the supply of methanol for bunkering: a bunker vessel and a storage tank will be built to carry methanol, as well as the corresponding facilities in both ports.

Biodiesel is a good candidate as a shipping fuel, being biodegradable, non-toxic and essentailly free of sulphur and aromatics. It can be used in many marine applications with little or no need for engine modification [Source: www.biodiesel.org].

Lloyd's Register was involved in a two year programme to test the suitability of biodiesel for use in powering marine engines. The feasibility study will take place on board the Maersk Line container ship, Maersk Kalmar. Collaborators in the biodiesel project were Maersk Line, Maersk Tankers, Maersk Supply Service, Maersk Drilling, Maersk Ship Management, Lloyd’s Register’s Strategic Research Group, and a consortium of Dutch subcontractors. The project was being part-funded by the Dutch government and co-ordinated by Maersk Maritime Technology (MSM) [Source: Lloyds Register].

In January 2015, Lloyd's Register announced the conversion of the ropax vessel Stena Germanica to a dual-fuel methanol propulsion system at Poland's Remontowa shipyard. The 240-metre-long, 1,500-passenger ferry, converted over a 45-day period from 28 January, 2015, was the world's first ever methanol-powered sea vessel. Approval and classification was by surveying teams from Lloyd's Register. Preliminary tests on a methanol-modified Wartsila engine 6ZAL40S similar to the Germanica's were overseen in Trieste by five LR teams from its Copenhagen, Trieste, Gotheburg, Venice and Southampton offices. By using methanol as its main fuel the revolutionary vessel, which is owned and operated by the Swedish ferry operator Stena Line, will be able to reduce her emissions of sulphur by 99%, NOx by 60%, particulates by 95% and CO₂ by 25% thus complying with the latest ECA regulations on its Baltic Sea route. Read more.

Ecofining™ has enabled Eni to supply biodiesel for the Italian navy’s offshore patrol vessel Foscari, the first example of its kind in the world.

GLEAMS (Glycerine Fuel for Engines and Marine Sustainability) is a Technology Strategy Board project under the Marine Vessel Efficiency competition in the UK. The project aims to develop technology for use of Glycerine (a by-product of biodiesel production) as a marine fuel for a wide range of shipping. GLEAMS Members include : Aquafuel Research Ltd, Gardline Marine Sciences Ltd, Lloyd’s Register EMEA, Marine South East Ltd, Redwing Environmental Ltd.

Partnership for drop-in shipping fuels from wood in Denmark

Tests of algal biofuels in shipping

In December and January 2011, Maersk and the US Navy both tested biofuels based on algal oils. The navy plans to continue the tests throughout 2012 as part of its "great green fleet" initiative and aims to cut its fossil oil use by 50% by 2020.

Currently Solazyme has a contract to provide 450000 gallons of algal biofuels for ongoing US Navy trials.

LNG (and biomethane) as a shipping fuel

Qatar and Royal Dutch Shell have agreed to develop liquefied natural gas (LNG) as a marine fuel for use by the world's largest container shipping company. Qatargas, the world's largest LNG producer, said the three companies signed a memorandum of understanding which sees Qatargas 4, a joint venture between Qatar Petroleum and Shell, producing the fuel for use by Maersk Line. Most shipping companies currently use heavy fuel oil, or bunker fuel, to propel their vessels although LNG as marine fuel has been used by some ships in the past decade.

DNV GL, an international energy and shipping certification agency, says while most of the industry will continue to use heavy fuel oil for now, LNG is being used more, in part because it more easily meets current and proposed emission rules. In a 2015 report, DNV GL said 63 LNG-fuelled vessels were already operating globally with another 76 ships being built that would use the new fuel. In contrast, Maersk has just under 600 ships operating, including some of the biggest in the world.

Biomethane is also gaining interest in the marine industry. Operators are looking increasingly seriously at using liquefied natural gas as an engine fuel. The Rolls-Royce Bergen K gas engine has been certified to power the world's first major car and passenger ferries running on LNG. There is a need for LNG storage facilities at ports to facilitate use of this technology.

The FP6 METHAPU project (Validation of renewable methanol based auxiliary power systems for commercial vessels) studied the use of methanol as a shipping fuel.

The consortium consisted of

The strategic objectives of the METHAPU project were:

In May 2010 the METHAPU fuel cell system, comprising the methanol tank container and the fuel cell room were installed onboard the car carrier M/V Undine A major aim of the project was to support the introduction of necessary regulations to allow the use of methanol as a marine fuel. The specific components of the technology validated were methanol fuel bunkering, distribution, storage system and methanol consuming SOFC unit. [Source: METHAPU project website].

Use of butanol in smaller marine crafts

In February 2012 it was announced that The U.S. Coast Guard was collaborating with Oak Ridge National Laboratory (US DoE) to test butanol blends in marine craft. Ethanol is already blended with gasoline in small boat engines, but this three-year test anticipates the potential availability of butanol at industrial scale.

Today, the feedstocks for marine fuels are crude oil or natural gas, used to produce residual (heavy) fuels and higher quality distillate fuels. The latter are used in emission protection areas and are known as ULSD – Ultra Low Sulfur Diesel. Electrification is not possible in water transport, therefore only gaseous and liquid biofuels would be alternative fuels - for example, BioLNG, methanol, hydrogen and biomass-derived products equivalent or substitutes for marine distillates and residual fuel. 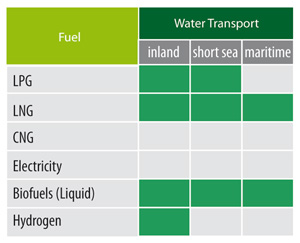 Biofuels are one of the options to lower carbon intensity in the propulsion of ships and to reduce the effect of emissions to local air quality. But the shipping sector is still in a very early stage of orientation towards biofuels. Currently no significant consumption of biofuels for shipping takes place within the EU. There are R&D initiatives investigating the possibilities (as shown below). For example, under the TEN-T Priority Project 21: Motorways of the Seas, pilot tests on Methanol as a marine fuel of the future are currently being carried out. Biomethanol potentially could be used as well as methanol from fossil sources.

Depending on the type of biofuel, the usage in the shipping sector could be done easily (drop-in fuels) or with huge modifications (new-build). Although there is not many practical experience with biofuels in ships, technical compatibility of biofuels with marine engines (both diesel-cycle and gas-fired engines) seems high and integration manageable.

The most promising option, from a technical point of view, seems to be small percentage biodiesel blends (up to 20 %) with marine diesel oil or marine gas oil (MDO/MGO), besides the 100 % replacement of heavy fuel oil (HFO) by straight vegetable oils (Ecofys 2012). The benefits of biodiesel compared to fossil fuels include possible blending up to 100 %, reduced soot emissions, no negative impacts on engines, higher cetane numbers and no bacterial formations in biofuel storage tanks. 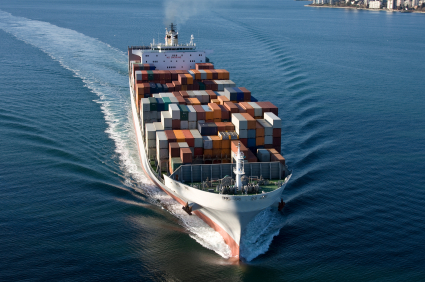 Future perspectives for biofuels in shipping

Water transport is among the fastest growing modes in the transport sector, and will be in future of certain importance, as it is a relatively low-energy mode of long-distance transport.

Future of maritime transport is very important for the European Union for intra-EU transport and global transport, and therefore goals for maritime transport were defined. The EU set ten goals for a competitive and resource efficient transport system for achieving the 60 % GHG emission reduction target. One of the goals is that 30 % of road freight over 300 km should shift to other modes such as rail or waterborne transport by 2030, and more than 50 % by 2050. Another goal is to reduce the EU CO2 emissions from maritime transport by 40% (if feasible 50%) by 2050 compared to 2005 levels, as the environmental record of shipping can and must be improved by both technology and better fuels and operations (COM (2011) 144).

References and reports on use of biofuels in shipping