On 6 January 2016, British Airways announced that it has been forced to shelve its GreenSky project to create 16m gallons of jet fuel from waste every year, partly due to a lack of government support [Source: The Guardian, UK]. British Airways planned to use 600,000 tonnes of MSW (collected in London) to produce over 50000 tonnes of biojet fuel and 50000 tonnes of biodiesel annually. The GreenSky project was to have used Solena's Plasma Gasification (SPG) technology, which can process 20-50% more waste than conventional gasification technologies, and Velocys technology for production of the jet fuel.

In February 2014, The Board of Directors of Vapo Oy made the decision to freeze project planning for the biodiesel plant planned for Ajos in Kemi. According to the companys's press release: The final, decisive blow to the project was that the EU’s climate and energy strategy published in January did not agree on new binding limits for the share of the renewable component in traffic fuels after 2020. “In this situation it is not possible to conclude long-term commitments, which would have created the financial preconditions for Vapo’s biodiesel project.”

It was also announced that the AJos BtL project, Finland, has been selected to receive counterpart funding of €88.5m under the first call for proposals of the NER300 funding programme for innovative low-carbon technologies.The Project concerns the design, construction and operation of a biofuel-to-liquid (BtL) plant in northern Finland, with a gasification capacity of 320 MW and an annual output of 115000 t/y of biofuel using close to 950000 t/y of woody feedstock and 31000 t/y of tall oil. The technical solution is based on the following main components: biomass pre-treatment, gasification island (comprising two gasification lines of 160 MW each and an air separation unit), gas cleaning and compression, gas-to-liquid conversion (Fischer-Tropsch) including refining, processing and storage of products. The Project will produce and sell biodiesel and bionaphta in the Baltic Sea area, with a focus on Finland and Sweden. Principal off-takers are expected to be diesel and petrol retailers.

The preparation work in the project had been carried out by the Forest BtL Project established by Metsäliitto and Vapo.

Linde Engineering Dresden GmbH had signed an agreement with Forest BtL Oy, Finland for licensing of Carbo-V® biomass gasification technology (see also Choren archive information below). Carbo-V technology was operated for short term, could not be put into stable operation but the operation of ~ 1200-2000 hrs. has shown the process principle (source: Linde presentation during IEA Workshop 2014).

NSE Biofuels Oy - a joint venture between Neste Oil and Stora Enso operated a BtL demonstration plant at Stora Enso’s Varkaus Mill in Finland in 2010. The output was 656 t/a from a 12 MW gasifier. As well as providing test data and operating experience, the plant also reduced greenhouse gas emissions as wood-based gas from the plant replaced oil in the pulp mill’s lime kiln, making the Varkaus integrate virtually fossil fuel free. NSE Biofuels (in partnership with Foster Wheeler and VTT) planned to develop a commercial production plant at one of Stora Enso’s mills with a projected output capacity of 100000 t/a and a potential launch date of 2016.

However, in August 2012 Neste Oil and Stora Enso announced that they had decided not to progress with their plans to build a biodiesel plant, for which the two companies had applied for funding under the EC's NER 300 programme. Although the technology has worked well at the demonstration plant (above), the project was not among those listed [in the NER300 intermin report] as scheduled to receive funding. Even with public funding, significant investment would also have been required for the commercial plant. [Source: Neste Oil website]. 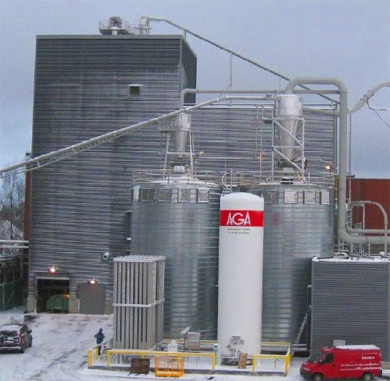 Previously, the world's first commercial BtL Plant was under construction in Frieberg Saxony, utilising the Choren Carbo-V ® Process. Choren Industries filed for insolvency in July 2011. A new investor for Choren Components was announced in October 2011. On 9 February 2012 Choren's biomass gasification technology was sold to Linde Engineering Dresden, who will further develop the Choren Carbo-V® technology used to produce syngas.

The Carbo-V® Process is a three-stage gasification process resulting in the production of syngas:

The Fischer-Tropsch (FT) process is then used to convert the synthesis gas into an automotive fuel SunDiesel®.

The SMDS process has been implemented on a commercial scale at the $18 billion fossil gas-to-liquids (GTL) plant, developed by Qatar Petroleum and Shell, with a capacity of 260,000 barrels oil equivalent a day.

The Choren website listed a number of advantages for SunDiesel®: 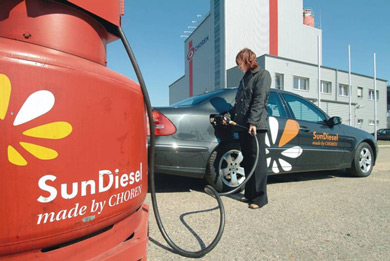