The term Biomass to Liquid (BtL) is applied to synthetic fuels made from biomass through a thermochemical route. The objective is to produce fuel components that are similar to those of current fossil-derived petrol (gasoline) and diesel fuels and hence can be used in existing fuel distribution systems and with standard engines. They are also known as synfuels.

The advantage of the BtL route to liquid transport fuels lies in the ability to use almost any type of biomass, with little pre-treatment other than moisture control. This is because the feedstock is gasified in the first stage of the process. The gas produced is then treated further to clean it, remove tars, particulates and gaseous contaminants, and to adjust the ratio of the required gases (hydrogen and carbon monoxide) to that required. The result is a balanced syngas that can be used in the second, catalytic, stage (typically Fischer-Tropsch or Mobil Process).

Although the individual steps for production of BtL are well known (and have been demonstrated successfully at industrial scale), integrating the various technologies for commercial production of BtL has proved challenging. In recent months some promising industrial scale demonstration projects have been cancelled due to uncertainty surrounding the regulatory environment for advanced biofuels in Europe. However, R&D&D on Biomass-to-Liquid continues. 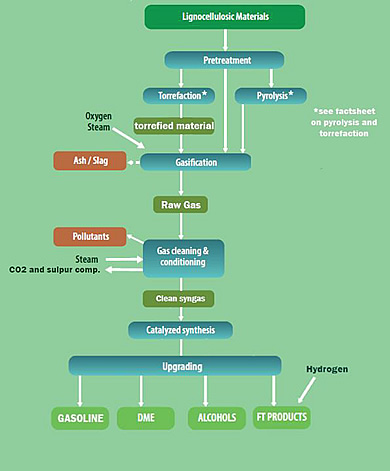