Biomass heat and power and bioelectricity for transport (VC3)

Heat and Power in Europe

The simultaneous generation of electricity and heat is called cogeneration or combined heat and power (CHP). In contrast to thermal power plants, CHP uses the waste heat, which is emitted during electricity generation, and therefore increases the efficiency of the process up to over 80 %. Common CHP plant types are gas turbines and engines, biofuel engines (adapted reciprocating gas engine or diesel engine), wood gasifiers, combined cycle power plants and steam engines.

Cogeneration systems are often integrated in pulp and paper mills, refineries, chemical plants and biorefineries. Bioelectricity can be used within the production process (i.e. to power the biorefinery) and/or be exported to the grid, potentially for use by electric vehicles.

Different kinds of biomass resources can be used as fuel for cogeneration plants to produce heat and electricity. Biomass may be co-fired in coal power plants or combusted in smaller dedicated biomass energy plants, where there is a reliable local supply of feedstock. Typically 10 % of biomass can be used for co-firing, higher percentages may be enabled by the use of biocoal, produced via torrefaction. Biomass may also be converted into carbon-rich gases (biogas by anaerobic digestion or BioSNG via gasification), which can be used in gas engines and turbines in CHP plants.

The use of liquid biofuels, such as biodiesel, ethanol, biocrude-oil or vegetable oil, for stationary decentralized energy generation is not very common. It is technically possible to feed biofuels to power and heat generation systems, but the economics of such processes are not positive (ETA 2003). Liquid biofuel production is highly energy intensive and the product costs are high compared to other resources. Therefore, although sustainable, biofuels are not favoured for use as fuel in CHP plants. 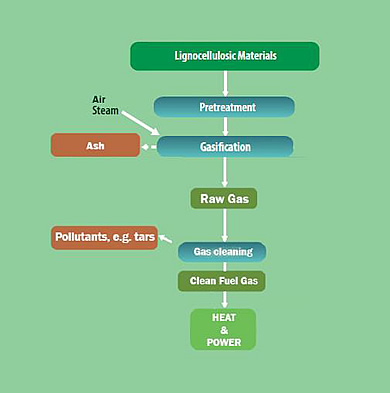 Power and heat via gasification value-chain
View at larger size >>