One of the objectives of SET4BIO is to identify the most promising funding and financing mechanisms to realize the SET Plan Implementation Plan 8 and to create awareness of funding needs and challenges among key stakeholders. One task in particular is the identification of institutional (public) funding opportunities, typically referring to funding that research organizations receive directly from ministries. Competitive (public) funding ate also addressed, i.e. funding distributed through competitive calls launched by funding agencies, whether national or European. This report, by SINTEF Energy, provides an overview of public institutional and competitive funding mechanisms aimed towards the activities prioritized in IP8 and their efficiency in implementing the respective goals. The present document is a preliminary version of the report, showing the background and methodology. Results shown here are for one of the SET countries only, Germany, as it was chosen as a showcase. Germany was chosen as this first country due to the ability by the authors to understand information published in German as well as support from FNR as one of three project management organizations in charge of Germany's federal budget for energy research.

During the project, the report will be updated regularly to ultimately include an overview over the funding situation of IP8 activities in all of the countries participating in IWG8.

Due to the political structure of Germany, research funding – competitive and institutional – can also be provided by each of the 16 states. In 2018 all 16 German states combined spent 90 million Euros as institutional funding for non-nuclear energy research. 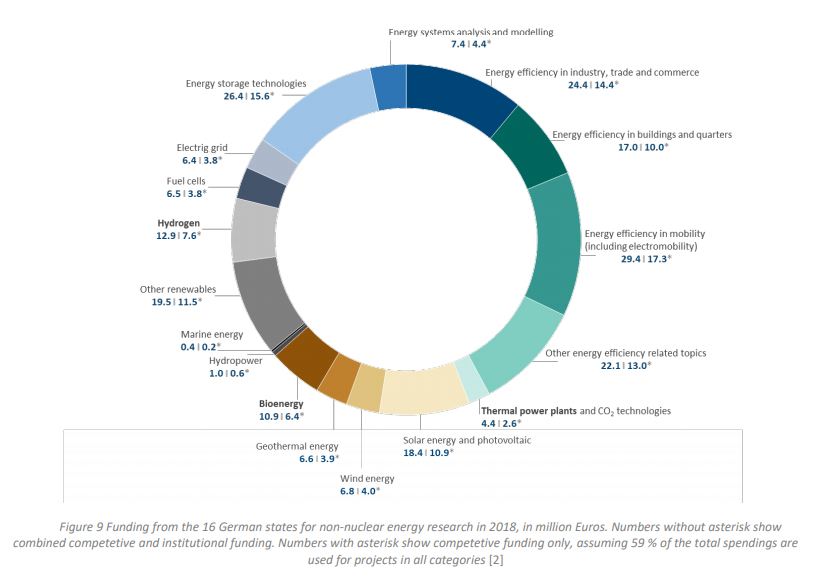 The German government has aimed to fund energy research within perennial funding programs since the 1970s. These programs are continuously developed in order to account for energy politics, technological advances and thematical extensions.Within the context of the SET Plan, Germany is involved in all of the implementation activities and the Energy Research Program is a major tool to support research and innovation in all the SET Implementation Plans. The currently running 7th edition of the funding program (ongoing until 2022) targets the energy transition. In 2019, projects within energy transition in transport have received 17.15 million Euros, gaseous bioenergy conversion 4.88 million Euros, liquid bioenergy conversion 1.12 million Euros, flexible large-scale power plants 17.74 million Euros, hydrogen production 1.13 million Euros and Power-to-X 1.33 million Euros. The total competitive funding from the Energy Research Program to research areas identified as relevant to IP8 in 2019 was therewith 43 million Euros. The competitive funding on state level contributed 16.6 million Euros on IP8-relevant activities (7.6 million on hydrogen-related projects, 6.4 million and 2.6 million on thermal power plant projects) in 2018.

Although not tailored for research and innovation activities of IP8, the data reported in Germany is quite comprehensive and gives a good overview of the energy research landscape. Throughout the course of the project, all IWG8 member countries will be assessed.