Overview of biofuels in Germany - from feedstock to end use 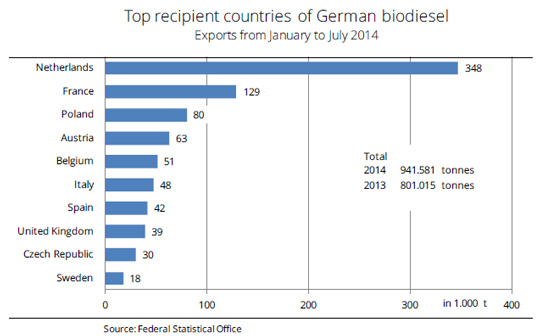 German biodiesel exports increased sharply over the first seven months of 2014. Totalling around 941,600 tonnes, biodiesel exports were up just under 18 per cent year-on-year. The Netherlands received more than one third of total exports. This translates to a 33 per cent rise and leaves the country in first place. Biodiesel exports to Spain shot up to 42,000 tonnes, from only 151 tonnes in the same period last year. Exports to France, Belgium and Sweden also rocketed, by 135, 68 and 29 per cent respectively. In other words, France secured second place again. Sweden, receiving 18,000 tonnes, ousted Hungary from tenth place on the list of top recipients. Between January and July 2014, EU countries absorbed around 94 per cent of German biodiesel exports. (AMI) [Source: UFOP].

Promotion of Biofuels in Germany

In the amendment to the law for promoting biofuels dated July 15, 2009 (Federal Gazette I p. 1804), the German Bundestag already stated that the energy-related biofuel quota would be converted to a greenhouse gas quota starting in 2015. The 12th amendment to the Bundes-Immissionsschutzgesetzes (Federal Emissions Protection Act) dated November 20, 2014 (Federal Gazette I p. 1740) also includes a number of new provisions for ensuring proper implementation of the greenhouse gas quota. A paper produced by UFOP explains practical frequently asked questions regarding calculating the greenhouse gas quota, so-called penalties, quota trading, handling excess quantities and the quota registration process. It should ease the transition to the new statutory framework conditions for companies in the mineral oil and biofuel sectors obligated to fulfil quotas.

Reports related to biofuels in Germany