Introduction and basic data on methanol

State of the Art for methanol production

Major stakeholders in methanol in the EU

Methanol, also known as methyl alcohol, wood alcohol, or wood spirits, is often abbreviated as MeOH. It is the simplest alcohol, and is a light, volatile, colourless, flammable liquid with a distinctive odour. At room temperature it is a polar liquid. MeOH is miscible with water, petrol and many organic compounds. MeOH burns with an almost invisible flame and is biodegradable. Without proper conditions, methanol attracts water while stored. Methanol is a safe fuel. The toxicity (mortality) is comparable to or better than gasoline. It also biodegrades quickly (compared to petroleum fuels) if spilled.

In nature MeOH is produced via anaerobic metabolism by many bacteria. It is also formed as a by-product during the ethanol fermentation process. MeOH also occurs naturally in many plants, especially in fruits. MeOH is mainly synthesized from natural gas, but also from coal, mainly in China and South Africa. Biomass can be converted to MeOH via thermochemical and biotechnological pathways as shown in the following diagram. 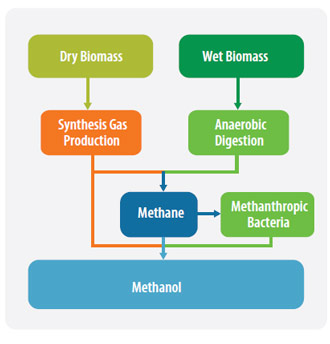 The thermochemical conversion paths to MeOH are basically the same as for fossil feedstocks, such as coal or natural gas.

The biomass is gasified and the resulting synthesis gas, a mixture of CO, H2 and CO2 is adapted to the quality requirements of MeOH synthesis.

During synthesis the following reactions occur:

The formation of MeOH is exothermic and is favoured by high pressures and low temperatures. For reasons of process simplification, investment cost reduction and energy consumption reduction, alternatives are under development, which could also be used for MeOH from biomass:

One biochemical route is via methane formation by anaerobic digestion. This process is well developed due to the rise of biogas production from municipal waste or landfill sites.

The biogas has to be cleaned to obtain a gas with high methane content and MeOH is then produced from the methane as described above.

Recently a genuine biochemical route using methanothrophic bacteria has been investigated. For example, bacteria such as Methylococcus capsulatus will convert methane to MeOH if methane is the only available resource.

MeOH has grown into one of the largest chemical synthesis feedstocks. Key uses include production of formaldehyde, MTBE/TAME (petrol additives), acetic acid, DME and olefins and direct use as a petrol blend component.

In 2007 the world production of MeOH amounted to 40 million tonnes with a forecast compound annual growth rate of 4.2 % for the period 2008-2013 excluding captive production for the methanol-to-olefins (MTO) route. Today, methanol from biomass is produced through gasification of glycerine, a by-product of biodiesel production, by BioMCN in the Netherlands. The thermochemical conversion of syngas to methanol is well known from fossil feedstocks and the basic steps are not different for biomass. The main issue faced is the economic feasibility of gasification of biomass at elevated pressures and conditioning of the raw synthesis gas.

In the past there was some small-scale production of methanol from biomass. In 2004 the German company Choren Industries GmbH produced methanol from wood using its Carbo-V process. In the Chemrec AB pilot plant in Piteå, Sweden about 6 tons per day of methanol is used as an intermediate in the production of BioDME. While the biochemical route through methanothrophic bacteria is still in an early state of development the conversion of biogas to methanol has been proven at bench scale. ZSW has proven that methanol could be produced from biogas at a decentralised level.

Low-percentage methanol-gasoline blends (up to 3 % as per current EU standard EN228) can be effectively used in conventional spark-ignition engines with no technical changes, the use of alcohol fuels in heavy duty applications is being investigated by motor manufacturers.

Some major methanol stakeholders in the EU are listed below: