Introduction and basic data on FAME

State of the Art for FAME production

Major stakeholders in FAME in the EU

Fatty Acid Methyl Esters (FAME) are esters of fatty acids. The physical characteristics of fatty acid esters are closer to those of fossil diesel fuels than pure vegetable oils, but properties depend on the type of vegetable oil. A mixture of different fatty acid methyl esters is commonly referred to as biodiesel, which is a renewable alternative fuel. FAME has physical properties similar to those of conventional diesel. It is also non-toxic and biodegradable.

Some properties of biodiesel are different from those of fossil diesel and for correct low temperature behaviour and for slowing down oxidation processes biodiesel requires a different set of additives than fossil diesel. Impurities, such as metals, in FAME must be limited for use as a motor fuel. 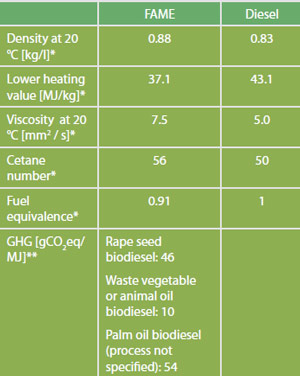 FAME is produced from vegetable oils, animal fats or waste cooking oils by transesterification. In the transesterification process a glyceride reacts with an alcohol in the presence of a catalyst, forming a mixture of fatty acids esters and an alcohol. Using triglycerides results in the production of glycerol.

Transesterification is a reversible reaction and is carried out by mixing the reactants. A strong base or a strong acid can be used as a catalyst. At the industrial scale, sodium or potassium methanolate is mostly used. The following reaction occurs:

The production of biodiesel is relatively simple from a technical standpoint, also allowing the construction of small decentralised production units without excessive extra costs. This limits the need to transport raw materials long distances and permits operations to start with modest-sized installations.

Rapeseed, sunflower, soybean, palm oils, UCO and animal fat are the most common raw materials being used for the production of biodiesel. Using methanol in the transesterification process has the advantage that the resulting glycerol can be separated simultaneously during the transesterification process. When using ethanol during the process the ethanol needs to be free of water and the oil needs to have a low water content as well to achieve an easy glycerol separation.

The end products of the transesterification process are raw biodiesel and raw glycerol. After a cleaning step biodiesel is produced. The purified glycerol can be used in the food and cosmetic industries, as well as in the oleochemical industry. The glycerol can also be used as a substrate for anaerobic digestion.

Industrial scale production of biodiesel for use as a transport fuel has taken place in Europe since 1991.

Tests have been undertaken by motor manufacturers in the European Union on blends with diesel oil up to 5-10 %, or at 25-30 % and 100 % pure. These have resulted in guarantees for each type of use. Modifications (seals, piping) are required for use at 100 % pure. The use of biodiesel as a low-blend component in transport fuel (up to 7 percent in Europe for the time being according to EN 590) does not require any changes in the distribution system, therefore avoiding expensive infrastructure changes.

Some of the major biodiesel stakeholders in the EU are listed below:

See the BtL and Energy Crops pages for updated information on advanced pathways to biodiesel from lignocellulosic feedstocks and 'sustainable' energy crops such as Jatropha.