Introduction and basic data on DME

State of the Art for DME production

Major stakeholders in DME in the EU

Dimethyl ether (typically abbreviated as DME), also known as methoxymethane, wood ether, dimethyl oxide or methyl ether, is the simplest ether. It is a colourless, slightly narcotic, non-toxic, highly flammable gas at ambient conditions, but can be handled as a liquid when lightly pressurized. The properties of DME are similar to those of Liquefied Petroleum Gas (LPG). DME is degradable in the atmosphere and is not a greenhouse gas. 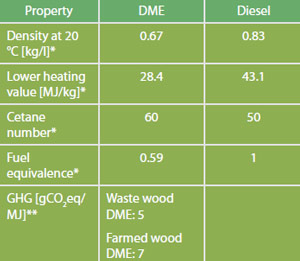 DME is primarily produced by converting natural gas, organic waste or biomass to synthesis gas (syngas). The syngas is then converted into DME via a two-step synthesis, first to methanol in the presence of catalyst (usually copper-based), and then by subsequent methanol dehydration in the presence of a different catalyst (for example, silica-alumina) into DME.

Both the one-step and two-step processes are commercially available.

DME can also be converted itself into olefins and synthetic hydrocarbons.

The DME demonstration plant in Piteå, Sweden, which was put into operation in 2010, is the only gasification plant worldwide producing high-quality synthesis gas based on 100% renewable feedstocks. The raw material used is black liquor, a high-energy residual product of chemical paper and pulp manufacture which is usually burnt to recover the spent sulphur. 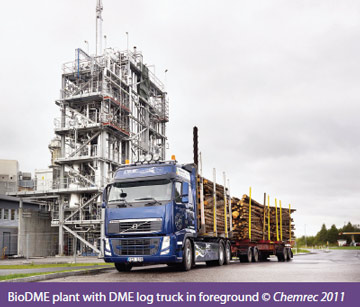 Due to its good ignition quality, with a high cetane number, DME can be used in diesel engines as a substitute for conventional diesel fuel. However, compared to diesel fuel DME has a lower viscosity (insufficient), and poor lubricity. Like LPG for gasoline engines, DME is stored in the liquid state under relatively low pressure of 0.5 MPa. This helps to limit the number of modifications required to the engine. Still, some slight engine modifications are necessary, primarily relating to the injection pump and the installation of a pressure tank, similar to that for LPG. The fuel line must also be adapted with specific elastomers.

DME in diesel engine burns very cleanly with no soot.

The infrastructure of LPG can be used for DME. As part of the FP7 project BioDME, under the leadership of the Volvo Group, DME production is being optimized, especially for use as a transport fuel.

BioDME - Production of DME from Biomass and utilisation as fuel for transport and for industrial use. Funded by 7th Framework Programme and Swedish Energy Agency.

Some major DME stakeholders in the EU are listed below: